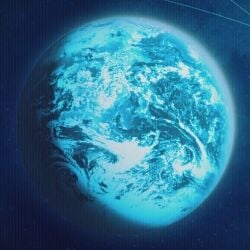 Koppai (コッパイ?) is the home planet of Alph, Brittany, and Charlie, the leaders in Pikmin 3. Much like Hocotate, life on Koppai appears similar to that of Earth's, but with some important differences.

Not much is known about the planet Koppai; its most important feature in Pikmin 3 is that it is about 279,000 light-years away from PNF-404. The diameter of the Milky Way is around 100,000 light-years; assuming PNF-404 is Earth, Koppai would exist in a neighboring dwarf galaxy (the Small Magellanic Cloud is a good candidate distance-wise, which suggests that Koppai would potentially be observable through telescopes from Earth's surface). Koppai's surface is never seen or described in-game, save for when Alph mentions that the sandy arena of the Sandbelching Meerslug reminds him of Koppai,[1] and how Twilight River reminds him of Koppai's hot springs.[2] Pikmin 3's opening cutscene seems to depict the planet with a very thick atmosphere, covered in large cloud masses. One can infer Koppai has an Earth-like interior, with convection, a magnetosphere, and a means of outgassing (such as volcanoes) to seal in and maintain its atmosphere.

According to Brittany, the gravity on Koppai is roughly ten times stronger than on PNF-404. Assuming PNF-404 is Earth, this most likely indicates that Koppai is ten times denser than Earth, classified as a Mega-Earth. Brittany also mentions that Koppai's atmosphere has one-third the oxygen concentration of PNF-404's. Accordingly, if PNF-404 is again assumed to be Earth, Koppai would have an atmosphere that consists of roughly 7% oxygen. Brittany hypothesizes that the higher oxygen ratio is what allows the life-forms of PNF-404 to grow to such comparatively large sizes. It is assumed that the giant insects that lived in the Carboniferous only grew to their size due to the greater amounts of oxygen in the air during that time, which would support her theory. In the good ending of Pikmin 3, it is stated that they were indeed able to cultivate the fruits on Koppai, suggesting that the atmosphere is similar enough to PNF-404 to grow its native food on Koppai.

Little is known about life on Koppai other than sentient life forms known as Koppaites, which are very similar to Hocotatians. Hocotatians and Koppaites seem to speak similar languages, as throughout the events of Pikmin 3, they communicate effortlessly, and even have a written language. Koppaites also have a very limited diet, highly favoring fruits over other foods.

The dialogues in the game imply that Koppai has other life-forms as well. Charlie's pet in the game is called a dog in the US version and a duck in the European version. At one point, Brittany also mentions geese on Koppai, and her notes on the Scaly Custard suggest the existence of reptiles there. The flora on Koppai must contain some resemblances to that of PNF-404, since the leaders can identify mushrooms and lily pads and misidentify the Formidable Oak on PNF-404.

Koppaites are the dominant species on Koppai. They stand around the size of a nickel, the same general size as a Hocotatian. Unlike Hocotatians, however, Koppaites seem to grow more hair on their heads and have smaller noses. Their eyes appear to be wide open at all times, whereas a Hocotatian's eyes appear small, squinted, and black normally, and widen when startled. Koppaites also have smaller ears that are rounded at the ends, as opposed to the Hocotatians' broader, pointed ones.

Koppaites can breathe oxygen, unlike Hocotatians. However, they must still wear protective suits while on PNF-404 because the planet's oxygen levels are three times higher than Koppai's.[3][4]

Koppaites are only capable of metabolizing a substance called Piktamin U. It is explained by Brittany that Pikpik Carrots do not contain Piktamin U, which is why Hocotate Freight could not help with Koppai's food crisis. Fortunately, the massive fruits found on PNF-404 contain large amounts of this substance.

One of Alph's dialogues seems to indicate that the Koppaite brain does not produce the hunger-appeasing hormone leptin, meaning Koppaites can and will continuously eat without ever feeling full; this problem was one of the reasons they have fallen into a famine.[5]

It is possible, though not confirmed, that Koppaites might be a related species to Hocotatians, but adapted to a different environment.

The following characters in the series are known to be from Koppai:

Prior to the events of Pikmin 3, it is known that Koppai has quite an expansive population, which lusts heavily for eatables. Its sub-par planning of the production necessary to sustain such a lifestyle eventually leads to a food shortage. Pikmin 3's storyline starts with three explorers being sent out on a mission to scour a distant planet for food, so that it may be retrieved to stop the hunger problem.

The technology on Koppai is likely similar to that on Hocotate, as several of the communication mediums used in Pikmin 3, such as Data Files and the KopPad, are compatible between Koppaites and Hocotatians. An interstellar bazaar is also known to exist, selling space-travel hardware that is bought by both Hocotatians and Koppaites.[6] The Koppaites also use Olimar's names for fruits and enemies that get identified by the S.S. Drake, meaning his original names are programmed in the Drake's database. These clues suggest that Koppai and Hocotate have established some possibly strong contact.

Koppai is also known to have the necessary technology to observe and locate extragalactic planets, construct unmanned scouting probes, called SPEROs, and launch spaceships capable of speech and tractor beaming, such as the Drake. Koppaite technology surpasses humans' technology in that spaceships contain a feature called "cosmic drive", which apparently allows material objects to travel intergalactic quickly; the key to activate this feature plays a pivotal role in the story of Pikmin 3.

There are distinct roles for engineers and botanists on Koppai – Drake and Alph are engineers, whereas Brittany is a botanist. These suggest that technology on Koppai has at least passed a point where job specialization is necessary for everyday life and cultural growth. Science on Koppai is also advanced, as evidenced by the Drake's reception of electromagnetic signals, the leaders' knowledge of oxygen, and their identifcation of Piktamin U, a vitamin vital to Koppaites present in all fruit in the game.

Other, minor objects are also known to exist on Koppai: Brittany mentions crayons in her notes on the Portable Sunset, in the American English script.

It seems that Pokos are a universal currency in the Pikmin universe, as Koppai is also hinted to use them. Pikmin 3's Collect treasure! stages have markers for a point value, labeled with what appears to be a Poko. This is not confirmed, however, as Mission Mode is not considered canon.

Due to the fact that Koppaites have it "written into their DNA to never stop eating and never stop to plan", it can be assumed that they have a very weak government. However, Brittany mentions elections when speaking to Alph, meaning there is likely an elected government on Koppai.[7]

A Data File left by Olimar and later found by the leaders mentions Hocotate. Whichever leader is active at the moment the file is retrieved will then recall that Hocotate is a planet a few solar systems away from Koppai, with a population that is interested in the monetary and historic value of objects and cultivation of vegetables. Olimar is simply referred to as a man who must love his family very much or have a lot of time to kill. While a vague description, the idea that the people of Hocotate and Koppai are unfamiliar with each other or even different species seems unlikely. As mentioned above, the technology and language used between the two planets are similar, and the two peoples have similar physical size and characteristics.

The name "Koppai" comes from Nintendo's founding name, "Nintendo Koppai", back when they were still a card company, and the Japanese word hirou kompai meaning exhaustion.