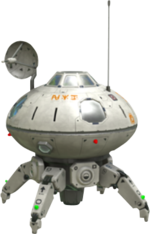 The S.S. Drake (宇宙船ドレイク号?; SS Drake in the European Wii U version), simply referred to by the Koppaites as the Drake (ドレイク?), is the main ship in Pikmin 3. It was designed by and named after Alph's grandfather.[1] Much like the other ships in the Pikmin series, it serves as the leaders' base, where the time in between days is spent. It also stores all the gathered objects found by the leaders, and transport the leaders from place to place. Charlie is its captain and Alph is its engineer.

The S.S. Drake in the Garden of Hope.

The S.S. Drake is not designed like a traditional rocket along the lines of the S.S. Dolphin or the Hocotate ship, instead more closely resembling a lander vehicle, particularly with its communication antenna which sits on top of the vehicle, plus its much rounder and stouter body providing a living space on foreign bodies. It also appears to be far more advanced than either of them, as the vehicle contains a small satellite that is used for surveying purposes, and instead of sitting on fins on the ground, the vehicle features four extending landing struts on which it sits on the ground, plus a set of other minor details. Several pieces of Koppaite text are written on the outside of the Drake.

Soon after the discovery of PNF-404, the Drake was designed and built by Alph's grandfather (also named Drake) exclusively for the heroes' mission. It then picks up Alph, Brittany, and Captain Charlie before initiating a warp-drive sequence to PNF-404. As they arrive at the planet, something goes wrong as the Drake attempts to enter the atmosphere, and it ejects the three occupants onto the surface below, each landing on different locations on the planet. During the crash, the Drake loses an important mechanism, the cosmic drive key.

Charlie awakes in a snowy world, where he discovers Yellow Pikmin. However, his side of the story is cut short as he is soon abducted by the Vehemoth Phosbat.

After landing in a pool of water, Alph regains consciousness to see a damaged Drake overhead, struggling to land safely. The sight startles him enough to wake him up fully, and he begins exploration of the surrounding area alone. Eventually, he comes across the Red Pikmin and their Onion, and using their help, is able to recover his KopPad and locate the Drake, which was able to land safely.

The cosmic-drive key (written as cosmic drive key in the European English version of the original Pikmin 3) is one of the most valuable parts of the Drake. It is necessary in order to achieve warp-speed, a maneuver needed to go from Koppai to PNF-404 and vice-versa.

Assemble All is a mechanic introduced in Pikmin 3 Deluxe. Approaching the S.S. Drake and pressing

will sound a large whistle and call all stray Pikmin back to the landing site. Any Pikmin that were performing a task will drop it, and all Pikmin run back at the same speed, which is slightly faster than that of a leader. This feature becomes available when the first sunset of Story Mode happens.

If Assemble All is used while a newly discovered Onion is still separate from the Master Onion, the Pikmin type belonging to that Onion will assemble there instead of the main landing site.

The Drake in the background of the Garden of Hope arena.

The vessel is named "Drake" after Alph's grandfather, who was also named Drake.

This name seems to have been picked by the developers for a few reasons. At one point during production, there were four main leaders, and their names had not yet been decided. They were given the placeholder names "A", "B", "C" and "D". The first three later ended up being the three Koppaite explorers in the final game, but "Character D" was eventually scrapped. Because the other leaders were given names that start with the same letter as the placeholder names, it is believed that "Drake" was the name that would be picked for the final leader, had he been accepted. Instead of deleting the name, the developers shifted it over to the game's main ship, the S.S. Drake.

In addition, the name "Drake" could also be a reference to the famous navigator Sir Francis Drake. This is hinted to by the trophy for the S.S. Drake in Super Smash Bros. for Wii U.[2] Finally, it could also refer to the Drake equation.

Although the navy prefix "S.S" normally means "screw-steamer", a steam-powered ship with a propeller, it can be assumed that this fictional navy prefix means something like "star ship" or "space ship."