From Pikipedia, the Pikmin wiki
< User:Espyo
Jump to navigation Jump to search

This guide will provide a strategy on how to reach the world record on The Final Trial, on Pikmin's Challenge Mode. The maximum possible number of Pikmin for this area is 299.

The strategy was based off of a video from Rouge7, but with some aspects tweaked.

The compass directions North, South, West and East are used here. You can use the map at the bottom of the page to base yourself on what each direction is. North = Up, South = Down, West = Left, East = Right. Alternately, know that the starting area is at the North, and the Emperor Bulblax / Beady Long Legs arena is at the bottom. In-game, the map is rotated 180 degrees (the Beady Long Legs arena is at the North, for instance), though, but when I wrote this guide, I didn't realize it, so use the compass directions in the way I just listed instead of the in-game way.

Common sense is a requisite to use this guide. Obviously, if you're aiming for a perfect score, you can't issue Red Pikmin to deliver a blue pellet to a Red Onion, not to mention that there should be 0 deaths.

And... That's it. Just sit back and wait. You can issue some loose Pikmin to help some carriers who are still a bit behind, if the day is almost over, but if everything went right, you don't need to press anything. 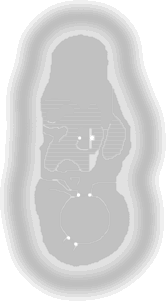