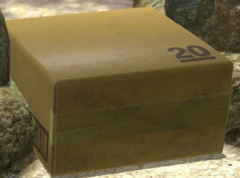 A cardboard box in Pikmin 3.

Cardboard boxes are obstacles in Pikmin and Pikmin 3. They usually block a pathway and take a minimum number of Pikmin to push.

In Pikmin, one can be found in every area except for The Forest Navel and The Distant Spring. Each one needs ten Pikmin to move it, and once moved, if it is next to a ramp, a box can be walked upon and act as a bridge. Cardboard boxes can also be entered from the open end on the side, and inside, bomb rocks can sometimes be found.

In Pikmin 3, the only cardboard box is in the Tropical Wilds, and it is both closed and cannot be walked on top of. There are other objects that function the same way, but they are either tin boxes or paper bags.

The tin box in the Garden of Hope.

Tin boxes are rare obstacles in Pikmin 3 that function similarly to cardboard boxes. They are gray boxes with a 20 written on top of it; they require 20 Pikmin to push. Their purpose is to block paths, until they are pushed by Pikmin, where they get out of the way, and serve the additional purpose of acting as a platform. Pikmin standing below the ledge a tin box is pushed from will not be crushed by it; instead they will just be pushed out of the way.

The only tin box in story mode is in the Garden of Hope, located near a Waddlepus and a Burgeoning Spiderwort, on the second section of the area. After pushing it, not only is the player able to get into the water from above, but the tin box also drops into a gap, becoming a platform. This allows the player to collect the Citrus Lump nearby.

Another tin box appears in the Formidable Oak Remix level in the Battle enemies! section of Mission Mode. Here, it acts as a platform for leaders to throw Pikmin across a small pool.