The Beady Long Legs (ダマグモ?, lit.: "Orb Spider") is an enemy in the first two Pikmin games. The only attack it has is stomping around – which it does more quickly when damaged – and its multiple feet crush any Pikmin they land on. Its weak spot is its orbicular torso; given its height, Yellow Pikmin are normally needed. When defeated, it crumbles into dust that disintegrates after its belongings drop from its orbicular torso. The creature is in both the main game and Challenge Mode of both games it appears on.

In Pikmin 2, the Beady Long Legs has a more brownish tone to its body, while in the first one it is just yellow. It also has slightly different shaped feet. Appearances in the second game are more common, and have much less health, slower movements, different cries, and their feet don't stick on the ground. When at low health, the Beady Long Legs will acquire a reddish tint and start smoking at the joints in Pikmin. In Pikmin 2, the creature's body will start to flake away at low health.

It first appears as a boss in Pikmin, where it is found in The Forest Navel, holding the Guard Satellite, and again in The Final Trial in Challenge Mode. In Pikmin 2, one appears on sublevel 5 of the Citadel of Spiders, where it drops a key which unlocks Challenge Mode, one on sublevel 14 of the Hole of Heroes, which holds the Fond Gyro Block, and one in the Twilight Garden in Challenge Mode (again holding The Key). Additionally, one more can be found in front of the landing site in the Perplexing Pool after day 30; killing this one yields 20 small 1-pellets. It appears every day if it is not killed and always spawns on the first day of each 10 day period starting from day 31. Despite rumors,[source needed] it is not exclusive to palindrome days (33, 44, etc).

The Beady Long Legs does not appear in Pikmin 3, but there are two new Arachnorb bosses similar to it, the Shaggy Long Legs and Baldy Long Legs.

“Although this creature is commonly associated with spiders, it is actually the result of a separate evolutionary line of insectoid creatures. Since the spherical body section supported by the creature's legs carries most of its internal organs, there appear to be no other features that would correspond to a head or abdomen.”

“This creature is so large, it would tower over the Dolphin. All the Pikmin can do is cling to its feet and try to slow it down. Its large round torso is its sole weak point - since Yellow Pikmin fly highest, they should be most effective against it.”

“Although this creature is commonly associated with spiders, the Arachnorb is actually the result of a separate evolutionary line of insectoid creatures. Since the spherical body portion supported by the creature's legs carries most of its internal organs, there appear to be no other features that would correspond to a head or abdomen. Waxy secretions form this creature's distinctive armored shell.”
“Stand in the shadow of the bug's round body, then fire Pikmin straight up into it. Only its ball-like body takes damage, and yellow Pikmin have less trouble soaring up to it. Weigh down the bug's feet with Pikmin to slow down the creature, but make sure your Pikmin don't get stepped on.”

“Eerily missing anything that resembles a head, this spiderlike creature is capable of stomping large numbers of Pikmin into oblivion with its four pile-driving legs. Its only vulnerable spot is its round body.” 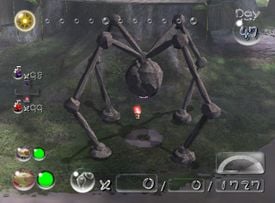 Be careful when entering the boss's arena in Pikmin, since it can crush Pikmin when it falls down from the ceiling. This can catch unprepared players with large armies by surprise, but was changed for Pikmin 2: the Beady Long Legs will not be able to harm Pikmin until its introduction animation is over.

You should have no more than 30 Pikmin, as a large group can be hard to control and may cause a few deaths. Aim at its core and launch your Pikmin freely, being careful to neither miss nor let the grounded Pikmin get stomped on. Swarming will prove helpful here. When it shivers, it is about to shake Pikmin off. Call the Pikmin quickly, or else they might fall off for a few seconds and lose their bud or flower status. In Pikmin 2, all Pikmin will be shaken off, but in Pikmin, a few may still remain latched. Attacking one of its feet in Pikmin will not cause any damage, but the creature will have difficulties landing it.

If you have a viable amount of Yellow Pikmin, attack at will, but if not, bring twenty to thirty of some other types, preferably Red Pikmin, and wait until it has done eight stomps (two with each leg); it will lean down afterwards to rest. It will do this twice, so you should ignore it the first time, and then as soon as it begins to lean again, quickly throw Pikmin at its body. This will allow you to attack for a longer period of time.

The Beady Long Legs can also be harmed by Pikmin attacking its feet; this is far more challenging and time-consuming, however. In Pikmin 2, only Purple Pikmin can damage the creature's feet with the stomp they cause, but in the Japanese version of the game, any Pikmin type can also attack its feet with regular attacks. As such, an easy way to defeat the Beady Long Legs in the Japanese version of Pikmin 2 is to place around 25 flowered Red Pikmin on the location where each foot is going to be, and when the creature lands from above, its health will be dropped so fast that it will not have time to stomp even once, ensuring a clean and quick victory.[1] It may be difficult to determine exactly where the feet will end up at, though. This trick does not work in overseas versions of the game, nor the Wii releases,[2] and it may only work with some of the Pikmin in the party.[3]

In Pikmin, it is recommended to bring twenty Red Pikmin to the entrance of the arena, so they may bring the Guard Satellite through the fire geysers.

Even when petrified, its body is suspended too high for leaders to reach.

In Pikmin, the fastest way to defeat the creature is to have around 20 Red Pikmin and around 6 Yellow Pikmin with you. Before the boss lands, use

to organize your party so that Red Pikmin are the closest to you. Walk into the arena, and begin throwing Red Pikmin so that they attach to the creature when it lands; when the Beady Long Legs falls down, its core reaches low enough for non-Yellow Pikmin to be thrown at it. Throw as many Pikmin as you can, using the swarm trick. When it shakes the Pikmin off, a few of them will remain attached. Carefully whistle the ones that got knocked down and throw them at the core again. The creature should be dead just as it's shaking the second time.[4]

At one point, a glitch about this boss was documented on Pikipedia.[5] It was said to be a rare and dangerous glitch that would cause the Beady Long Legs in Pikmin to leave its arena. Once outside its boundaries, it would continue to pursue the player, and if coaxed into falling into the pit, the game would crash. It also claimed that the game could crash if left outside of its arena for too long, and that it could also happen with other bosses fought in arenas.

Despite the glitch's popularity, there was never any proof of it happening, though there were attempts.[6] In fact, without editing the game's files to force the boss's territory radius to be larger than normal, there is no known way for the Beady Long Legs to walk far from its starting point, as it will attempt to return to the center of the arena if it exits a certain radius. In addition to the Beady Long Legs being unable to escape its arena in normal play, the crashing element is a hoax: should the player move the Beady Long Legs to the pits at the edge of the Forest Navel and coax it inside, its model distorts to try to "step" in the pit, before merely despawning.[7][8] Since the editor that documented the glitch did so anonymously, and a bit haphazardly, it is impossible to figure out any details about the origin of the glitch.

The word "Beady" in its name highlights its small and circular body. Its Japanese name, ダマグモ?, literally translates to "Orb Spider", once again reflecting the creature's spidery look and the spherical body. In the scientific name, Pseudoarachnia armoralis, armoralis comes from the Latin armum, which translates to "armor" and refers to its strong resistance. The creature's internal name in Pikmin 2 is the same as its Japanese name, damagumo, but in Pikmin, only the "spider" part of the word remains, making it kumo. 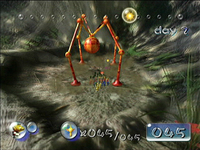