The Burrowing Snagret (ヘビガラス?, lit.: "Snake Crow") is an enemy in the Pikmin games, and is a boss in Pikmin 2 and a mini-boss in Pikmin 3. It appears to be a combination of a bird and a snake, and is a member of the Snavian family. It remains underground for the majority of the time, surfacing only when approached by Pikmin or a leader. In the first two games, it has a chance of struggling to fully emerge for a few seconds before attacking. When above ground, it attempts to eat Pikmin one by one until it is sufficiently damaged, at which point it burrows back underground. In Pikmin 3, it can also stab its beak into the ground to eat a leader and then regurgitate them – if the attack misses, its beak will get stuck in the ground and its head will be vulnerable to attack.

When killed in Pikmin, Burrowing Snagrets explode into many pellets; in Pikmin 2, a dead Burrowing Snagret leaves behind its head to be returned to an Onion or the Research Pod. In Pikmin 3, the Snagret's entire body comes out of the ground to be salvaged, revealing a foot much like the one on a Pileated Snagret.

In Pikmin, 3 Burrowing Snagrets are found in the same area of The Forest of Hope, one of which contains the Geiger Counter. One is also found in The Final Trial in Challenge Mode.

In Pikmin 2, a Burrowing Snagret is the main boss of the White Flower Garden, found on sublevel 5 (this one contains the Five-man Napsack), and many are encountered throughout the Snagret Hole; one is even guarding the entrance in the Awakening Wood, where the three in Pikmin are located. Another is on sublevel 4 of the Hole of Heroes, and yet another guards the Pink Menace in the Valley of Repose. Burrowing Snagrets are the most common boss-class enemies in Pikmin 2, having eight different in-game occurrences outside of Challenge Mode.

“The bluish hue of its feathers distinguishes it from the burrowing snarrow.”

“The majority of snagret species lie in wait to ambush and capture prey, with a body type perfectly adapted to such sudden strikes. It violently attacks small, surface-dwelling insects. Distributed across a relatively wide range, subspecies of snagret suited to the varying soil conditions have emerged, making the snagret the most geographically represented species besides the bulborb. Visually resembling the burrowing snagret is the burrowing snarrow, the range of which partially overlaps with the snagret's range. While the two may appear similar, when pulled from the ground they can be distinguished by the presence or absence of tail and wing markings.”

“Slice the serpentine torso into thin medallions, skewer on a metal rod with Hocotate onions, and barbecue over an open flame.”


Its bulk and speed make it a very fearsome model. It's very difficult to retrieve a Pikmin once it's snapped one up in its beak. However, if you can dodge its beak as it comes down, the beak's sharpness works against it as it gets stuck in the soil. That leaves the head wide open to be pelted with Pikmin as fast as you can.”

“I've never seen the bottom half of one of these. I have all sorts of ideas about what might be under there. It could be a long snake tail, or a big, plump body stuck underground. Or maybe, below the neck, it looks just like us.”

“Now, I get that it's big, and that big things are scary. But that twisty neck can't twist all the way around, so all you have to do is get behind it. Once you're there, pour on the Winged Pikmin, and you're golden!”

“Slice the serpentine torso into thin medallions, skewer on a metal rod with Hocotate onions, and barbecue over an open flame.”


The majority of snagret species lie in wait to ambush and capture prey, with a body type perfectly adapted to such sudden strikes. It violently attacks small, surface-dwelling insects. Distributed across a relatively wide range, subspecies of snagret suited to the varying soil conditions have emerged, making the snagret the most geographically represented species besides the bulborb. Visually resembling the burrowing snagret is the burrowing snarrow, the range of which partially overlaps with the snagret's range. While the two may appear similar, when pulled from the ground they can be distinguished by the presence or absence of tail and wing markings.”

“This large, subterranean life-form suddenly erupts from underground to feast on nearby Pikmin. Its body is covered in slick scales, which render Pikmin attacks ineffective. Surely, it has a weak point somewhere...”

"The Burrowing Snagret's weak spot is its head. Toss Pikmin at the bird-snake's skull as it's emerging from the ground, and let them go to work on the beast. Call them before they're shaken off and prepare for another assault."

"The white-headed snagret is a subterranean dweller characterized by a birdlike head and a snakelike body. Its avian head features white plumage and a long, pointed beak, which it uses for digging, while its reptilian body is covered with blue scales. White-headed snagrets burrow in flocks and they will rear their heads when surface vibrations alert them to possible prey above ground. The blueish hue of its feathers distinguishes it from the burrowing snarrow."

“Snagrets usually hang out in groups of three, and their agile beaks are capable of plucking up devastating numbers of Pikmin. When attacked, they temporarily retreat underground.”

"As its name implies, the Burrowing Snagret spends most of its time underground. When it senses potential prey, however, this creature emerges and uses its powerful beak to snatch up any victims in range. The Burrowing Snagret's body it protected by scales, making the creature's head its only weak point.

Each time a Burrowing Snagret emerges from the ground, there's a brief pause just after the creature's beak appears -- this brief window is the only opportunity you'll have to execute a successful charge. If your Pikmin can latch onto the creature's head before it's fully exposed, they'll be able to do a significant amount of damage in a very short time. Winged Pikmin can charge the Burrowing Snagret's head whenever it's above ground, but you'll need a large squad to compensate for the Winged Pikmin's low attack power.

If you can't seem to land a successful charge attack, flank the Burrowing Snagret's side and toss your Pikmin directly onto the creature's head. This method makes it fairly difficult to keep your squad out of harm's way, but it does allow you to deal reliable damage for the duration of the battle." 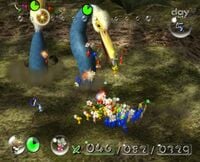 Olimar fighting a pair of Burrowing Snagrets in The Forest of Hope.

In Pikmin, they are extremely hard to beat without losing Pikmin if thrown at the head, as they have very high health and are quite large. Its striking speed will also allow it to eat some Pikmin and burrow back into the ground before any significant damage is done. When trying to defeat it in the first game, the best strategy is to throw Red Pikmin at its head while it's emerging from the ground as fast as you can, then whistling in your Pikmin right before it shakes them off to prevent them being eaten. Another effective, but risky way is to swarm the head in hopes of making the Burrowing Snagret retreat underground.

In Pikmin 2, defeating one is an easier task because of its lower health; even so, it remains a good idea to use Purple Pikmin. It is easy to take advantage of the fact that sometimes, the beast will not fully emerge from the ground, getting stuck for some time. It is best to attack the Snagret then, as it is possible to defeat it without losing any Pikmin. With quick and accurate throwing, however, this is not necessary to secure the battle. Throw many Pikmin at its head as soon as possible and the Snagret should die before managing to swallow any of the Pikmin that it may have snatched up from the ground. In Pikmin 2, attacks to the body will only cause 10% normal damage. Statistically, both in Pikmin and Pikmin 2, every time the creature emerges it has a 40% chance of getting stuck.[1] That said, a Burrowing Snagret will never get stuck the first time of the day that it unburrows, in Pikmin.

In the first two games, if it burrows back underground without swallowing Pikmin it has caught, these Pikmin will die. In the first game, it was the root of many glitches involving the counter.

In Pikmin 3, the health is even lower, and Winged Pikmin can be charged directly onto its head to defeat it quickly, especially under the effects of an ultra-spicy spray. The boss can only eat Pikmin on the ground. It is helpful to stay away from its beak, as if it eats a leader, it can take a while to get all your Pikmin back into your squad.

It is not possible to defeat the Burrowing Snagret with leaders alone.

The Burrowing Snarrow is a creature that is referred to only twice in the Pikmin series, but never seen. The first of these mentions is in the enemy reel at the end of Pikmin, while the second is in Olimar's notes on the Burrowing Snagret in Pikmin 2's Piklopedia.

The Burrowing Snagret appears in Super Smash Bros. Ultimate as an Assist Trophy, in its Pikmin 3 design. When summoned, it will emerge from the floor (even go-through platforms) near an opponent, and will idle for a second before unleashing three quick stabs towards the opponent. It can peck at the ground or the air. It will then bury back down and reemerge elsewhere, repeating the process. Like other Assist Trophies, it can be KO'd if it takes enough damage. It makes the Burrowing Snagret death sound from Pikmin when it emerges, and also when it is KO'd.[2]