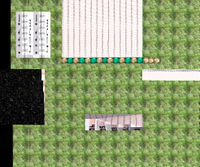 newtest is an unused area in Pikmin 2 that was left on the disc. It was most likely used for testing purposes, given the name and appearance. If the radar is opened, "Test Area (ID 8394_03)" will appear as the area name.

It is found under /user/Kando/map/newtest, and can be played on by using the following Action Replay code, for the European version:

There is also a slightly simpler version of this map, found in /user/Kando/zukan. It is identical to the "full" version, except it's missing the floor used to test footstep sounds.