The Awakening Wood (めざめの森?, lit.: "Forest of Awakening") is the second area in Pikmin 2. It is set in a grassy garden in the season of spring. It contains four caves, and seven overground treasures worth a total of

The area is Spring-themed, with grassy terrain, cherry blossoms, and objects and features that might be found in a garden; the great number of Pellet Posies make it arguably the best place to produce Pikmin. These features, along with its layout, make the Awakening Wood very similar to The Forest of Hope from the first Pikmin game. Olimar also states that he explored this forest before, in his journal entry for the Geographic Projection, but has now renamed it due to how much it changed.

The ship and the Onions land in the southwestern portion of the map. To the west of the landing site is an open area containing a single Red Bulborb and some Dwarf Red Bulborbs. Near the puddle of water in this area is a small flower pot that is home to an Iridescent Glint Beetle. To the south of the landing site is a small area that contains several flower pots and a small natural ramp that leads to the top of the pots. This area has numerous Pellet Posies as well as several benign Female Sheargrubs, and a Burgeoning Spiderwort that only appears on day 11 and beyond.

The rest of the map is accessible from two locations: one is a central area that contains two Burgeoning Spiderworts that, once a black bramble gate is torn down, opens to the western (which is guarded by a Creeping Chrysanthemum), eastern, and northern portions of the map. The other is over a small bridge that must be constructed which leads directly to the western portion of the map. The western region of the map is linear like a corridor, and stretches from the north to the south. On the northernmost side of this corridor portion is the entrance to the Hole of Beasts. Following the path to the south leads to a moderately sized pond with two Yellow Wollywogs and two bridges that can be built.

The southwestern portion of the map is at a higher ground level and, as such, can only be accessed by traveling through the western passage. It contains a Burrowing Snagret and the Snagret Hole inside of a tree trunk behind a white bramble gate. A few Pellet Posies, including one that yields a 20-Pikmin pellet, grow on this region. The northeastern portion of the map is accessed after deflating a paper bag. Behind it is the White Flower Garden. Near the White Flower Garden behind an electric gate is a circular area that houses the Blue Onion and numerous Pellet Posies and Wogpoles. Traveling deeper through the northeastern portion, after taking down a poisoned bramble gate, yields access to the a portion of the map to the northeast of the landing site, after using a weighted seesaw block. This area contains a single purple Burgeoning Spiderwort and a small tree stump that leads to the Bulblax Kingdom behind an electric gate. This area can also be accessed after destroying a black bramble gate in a tiny puddle to the north of the landing site. This puddle can be drained.

The central area of the map contains two Burgeoning Spiderworts that produce red berries as well as housing a few Honeywisps. A purple berry-yielding Burgeoning Spiderwort can be found on the ledge that has the stump that leads to the Bulblax Kingdom. On the southwestern ledge of the map after ten days have passed there will be three 10 pellet Pellet Posies; one for each primary Pikmin types; and one 20 pellet Pellet Posy that periodically cycles through the three primary colors. The Blue Onion can be found in a large pool on the northern side of the map. 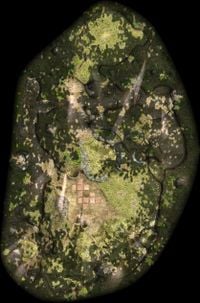 Map of the Piklopedia version of the Awakening Wood.

By placing the ship icon on the Awakening Wood in the area selection menu, the Piklopedia and the Treasure Hoard will take place in the Awakening Wood, although it is actually a slightly different version of the area that is closer to The Forest of Hope in design. The following differences can be noted:

An animation comparing the Pikmin 3 title screen with the Awakening Wood.