The Perplexing Pool (まどいの水源?, lit.: "Spring of Perplexity") is the third area in Pikmin 2. It is set in a sandy wetland in the season of summer. It contains four caves, and seven overground treasures worth a total of

× 520 in the European version. It is unlocked by retrieving the Geographic Projection from the Awakening Wood. Yellow Pikmin are discovered in this area. Its terrain is based on The Distant Spring from Pikmin.

The Perplexing Pool is a complex area, with a wide variety of terrain types. Parts of the area are like a beach, while others are grassy, and there are circular wooden structures around the area. It is the most aquatic area in Pikmin 2, with multiple lakes spread across its length and two of the caves being submerged, making Blue Pikmin a necessity. Its layout has a close resemblance to The Distant Spring of the first game, though it does have some changes. At one point, Olimar points out how much the area has changed since his last visit.[1] There is a big concrete area where there were only small islands and water in the original, there is no water in the middle of the area, the Shower Room is where the Massage Machine originally was, the Submerged Castle is where the Chronos Reactor was, most of the gates are gone, and there are 3 Burgeoning Spiderworts in the area – two in the middle of the area and one in the water. 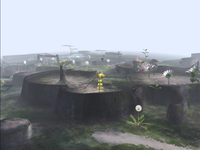 A view of where the Yellow Pikmin are located.

In Pikmin 2, Yellow Pikmin are discovered in this area. The player must navigate around the stumps and use the scales to get to higher elevation. Alternately, if they are skilled enough, they can throw their Pikmin onto the ledge near the bridge to the right of the large stumps, then carefully guide them to building the bridge. Any Pikmin that fall in the water can be easily whistled back. The Fiery Blowhog in the way can be bypassed. Then, the player must fight a Fiery Bulblax with Red Pikmin. After killing the Fiery Bulblax, White Pikmin must break down a bramble gate with poison pipes inside. The Yellow Pikmin are on the other side of this gate. 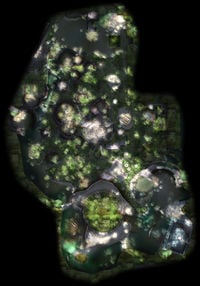 Map of the area as it appears in the Piklopedia.

The Piklopedia and Treasure Hoard version of this area, which can be accessed by placing the ship's icon on top of the area and entering the archives, is similar to the in-game Perplexing Pool, but with the critical difference of having a large, round, open arena as the landing site, instead of a rectangular closed-off room. That circular region is also surrounded by an irregular beach of sand, surrounded by scrap metal. The following differences can also be noted: