The Wistful Wild (のぞみの大地?, lit.: "Land of Wishes") is the fourth and last area in Pikmin 2. It is set in an autumn forest. It contains three caves, and five overground treasures worth

× 3175 in total. It is unlocked when Hocotate Freight's debt of

× 10000 is fully repaid. It is the hardest area in the game. Its terrain is based on a combination of The Impact Site and The Final Trial from Pikmin.

The Wistful Wild contains a variety of terrain types, such as dirt, wood, and metal. Some contents of the region include two large lakes, one of which can be drained and the other a bridge built over; a clearing with three random-typed Burgeoning Spiderworts; and decorating it are rusted metal structures, tree stumps and Foxtails, and a half-visible yield sign where the Onions land. 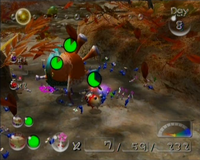 A Gatling Groink in the Wistful Wild. 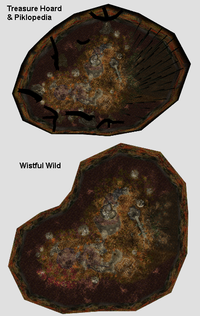 Comparison between the two visible level models. Note the slight differences in shape.

When the Hocotate ship's icon is placed on top of the Wistful Wild and the Piklopedia or the Treasure Hoard are entered, the archives will be seen on the Wistful Wild. Like the other areas, the model for this location is different from the in-game area model, but unlike the other areas, the level layout is identical, and the differences are very minor.

The most obvious difference between the in-game Wistful Wild and the Piklopedia version is a change in background theme; while the Wistful Wild version takes place in an autumn-themed forest plain with some stumps, the version used in both the Piklopedia and Treasure Hoard is situated between a dense bamboo forest and an actual autumn forest with actual, modeled, trees. The following differences can also be noticed: