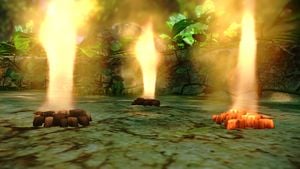 A group of fire geysers in Pikmin 3.

Fire geysers are holes protruding from a surface that occasionally spit out columns of fire. Unlike regular geysers, fire geysers are harmful to Pikmin that are not Red Pikmin or Bulbmin, and they also damage leaders unless the Scorch Guard upgrade has been collected. Their main purpose is to block pathways, encouraging the player to use Red Pikmin to explore the area to avoid other Pikmin types catching on fire.

In Pikmin, fire geysers are in static locations, spit fire at regular intervals, and cannot be destroyed (although they can be punched by Captain Olimar, even if it is pointless). They deal a considerable amount of damage to Captain Olimar, and may hit him multiple times during the same discharge.

In Pikmin 2, fire geysers are damageable, and if destroyed, they will stop ejecting fire, making them harmless. Although any Pikmin type can damage a fire geyser, Pikmin that are vulnerable to fire are likely to get burned if the geyser shoots out a column of fire during the attack.

In Pikmin 3, fire geysers act like the ones in Pikmin, except they are not visible when they are not shooting fire or about to shoot fire. The only way to tell a fire geyser is somewhere is when a pillar of fire emerges from the ground. This can catch unwary players by surprise. Leaders can punch fire geysers in this game, but the geysers won't take any damage.

In Hey! Pikmin, fire geysers are very large and can be found on both floors and ceilings. They are the main mechanic of the Ordeal of Flame area.