A group of Red Pikmin drowning.

Water is the most common hazard and obstacle in the Pikmin series, since it is presented mostly through bodies of water that are a part of the terrain itself. Water is a hazard to most Pikmin types, given that they cannot swim nor breathe underwater. The main exception to this is Blue Pikmin, which are unaffected, making this type of Pikmin ideal for underwater tasks. Bulbmin are also water-resistant, but are only found in caves. Winged Pikmin can also fly above the surface, making it possible to traverse bodies of water with them in the group, though they cannot be thrown when the leader is underwater.

Water in and of itself is not harmful to the Pikmin. Some bodies may be too shallow for the Pikmin to drown in, in which case they are completely harmless. Geysers also spew out water with immense force, but all Pikmin types can still ride them. Rain in Pikmin 3 also has no adverse effect on the Pikmin.

In Pikmin and Pikmin 2, leaders, Blue Pikmin, and Bulbmin stick to the bottom of the terrain while underwater, and gravity acts as if they were on land. In Pikmin 3, Blue Pikmin were given the ability to swim, allowing them freedom to move up and down, such as when chasing aquatic enemies. Leaders will always remain on the ground, however, and when they throw a Blue Pikmin, said Pikmin will slowly ascend and descend while underwater.

In Hey! Pikmin, water can also be lethal to non-aquatic enemies. In order to cross bodies of water safely, Olimar must either not have any non-Blue Pikmin with him, or he must throw the ones that can't swim at Seeding Dandelions. Olimar and the Blue Pikmin can swim in water in this game, and the Pikmin will follow Olimar around and come back when thrown underwater.

Any inapt Pikmin type that touches water will begin flailing at the surface. They will eventually stop and drown, resulting in a Pikmin death. Pikmin in this state might be saved by having them slowly flail towards the leaders, and luring them to dry land. Pikmin in Pikmin 3 will follow leaders automatically, but in the previous games, they must first be whistled. Alternatively, if there are idle Blue Pikmin nearby, they can toss drowning Pikmin onto land in Pikmin and Pikmin 2.

Drawing of drowning Pikmin in the high scores menu of Pikmin 2.

Bodies of water are not the only way Pikmin can suffer from a water hazard. Some enemies have attacks that wet vulnerable Pikmin in such a way that a bubble of water forms around the top of their stem. This is enough to leave them choking and running in panic. If they're whistled in time, they will instantly return to normal, but if not, they will eventually collapse and die. These water attacks will cause damage to leaders as well, and can knock them down.

Some bodies of water may cover the way to an important part of the area, where non-Blue Pikmin are needed. These pools might have a clog, which can be destroyed in order to drain the water, a bridge that can be built and used to cross over, or some lily pads can be taken to ride through and across a stream. Alternately, Winged Pikmin may be used, as they can fly above the surface of the water. 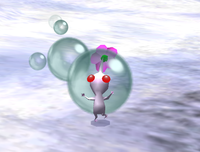 A White Pikmin choking because of a water bubble caused by the Watery Blowhog.

Most commonly, water can be found as natural bodies of water, like lakes or puddles. Some other sources of water exist, and can affect Pikmin that are not Blue Pikmin or Bulbmin.

For the most part, enemies are not affected by water, but some exceptions exist:

The water in Pikmin has a faint reflection of the walls and leaves on the trees. This effect is actually obtained by having the walls duplicated and inverted under the ground, as well as having a white "bowl" with the shadows of the leaves. The ground texture underwater is then made see-through. Effectively, when looking at the water, the player is not seeing the reflection of objects high above, they're actually seeing through the ground, into a textured surface.

There are a few glitches related to the water in the series: