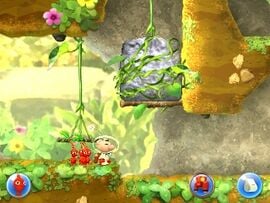 A pulley rock in Cherrystone Pass.

Pulley rocks are obstacles in Hey! Pikmin. These consist of a large stone, a stick that can be held on to, and a large vine connecting the two. Both the stick and stone are wrapped around vine and roots, making the two securely joined. The two are also connected by a pulley system. Pikmin must be thrown at the stick so they can hold on to it. When enough Pikmin are on the stick, it goes down, and the stone goes up. Whistling the Pikmin will make them release the stick, which will cause it to spring back up, and the rock to crash back down. Even if Captain Olimar, other Pikmin, or even enemies go on top of the rock, it will not change the weight requirement. These obstacles act as puzzle elements, since depending on whether they are raised or lowered, the rocks can block some passages but open access to others. Their size and weight changes between appearances, and some pulley rocks can be lifted up to a certain point, and when released, the rock lands on a twig, and doesn't need to be raised any more after that.