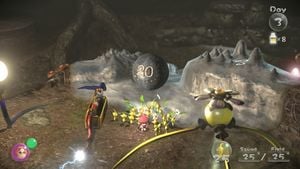 An iron ball next to the Yellow Onion.

Iron balls are objects found throughout Pikmin 3 that serve as an interactable obstacle, much like the cardboard boxes. They are very plain metallic-gray orbs with "20 weight" inscribed on them. As the number would imply, 20 Pikmin are needed to push them. Because there is not enough surface area on the object for 20 Pikmin to push it, some Pikmin will go behind other ones and push them instead.

Iron balls are always placed at the top of a slope, so they will rush down a fixed path once the Pikmin have set one in motion. With its momentum and weight, it will break open walls the Pikmin could not have torn down themselves. This opens entrances and exits to other parts of an area. Creatures in the ball's path will be killed, allowing the player to defeat enemies in some rare cases, but Pikmin (that aren't Rock Pikmin) are more likely to be crushed if the player does not pay attention. As such, it is not advised to have more than 20 Pikmin charge at a ball, as some of them may get in front of it while attempting to find a spot to push on.