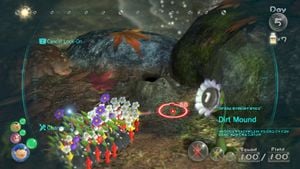 Dirt mounds are obstacles in Pikmin 3. They appear as lumps of dirt on the ground, with a hole on top that Pikmin can climb in through. The burrows inside contain items, including fragments, bomb rocks, pellets and data files. In order for the Pikmin to enter the hole, the player must have them charge at it, or throw them towards the mound. Once everything has been removed, the Pikmin come out of the dirt mound, which then collapses and becomes unusable. They become active again after a day, though, unless they had fragments in them.

After any number of Pikmin go in and the digging starts (represented by the mound shaking), it takes roughly ten seconds for the first item to be spit out of the mound. Any other items will be spat out at a regular interval that depends on the number of Pikmin inside the hole, calculated at a logarithmic rate (i.e. twenty Pikmin are a significant improvement over one, but forty are a relatively minor one over twenty).[1] Pikmin type, maturity, and spicy status do not have an impact on the speed at which new items come out. Because the number of Pikmin only influences the time it takes for the second and beyond items to come out, dirt mounds with only one thing inside of them will take just as long to clear with one Pikmin as they will with one hundred.