Ok, I guess I'm User:Undead414 and I am going to tell you the Pikmin 1 and Pikmin 2 bosses and the stages that they fight in.

The Burrowing Snagret is basically the first boss in both Pikmin games. The boss was a bird-headed serpent that sat below the surface, waiting for wandering pray, such as pikmin. It served as a boss that was hard to beat without losing one pikmin

for it could snatch 3 of them up quickly. Best strategies were waiting for the snagret to emerge from the ground and get its head stuck. This was the best time to attack it. In Pikmin 1 the burrowing snagret appeared in The Forest of Hope in a trio. Only one held a valuable ship part, two others served as distractions for Olimar. It appears much more often in Pikmin 2. Most times encountered in both games, it was found in a large arena. The Forest of Hope held this creature, and so did The Final Trial (challenge mode) served as the battle areas. In Pikmin 2, it was found in alot of open areas, as well as some winding areas like the Hole of Heroes snagret and the burrowing snagret in Valley of Repose. In Pikmin 1, its head exploded with its body, in pikmin 2 its head didn't explode, allowing you to carry its head.

Beady Long Legs is part of the Arachnorb family. It resembles a large long legs with only 4 legs that can crush pikmin easily. Now, Beady was a "patience" boss. In both games, Yellow Pikmin were the only ones who could be thrown high enough to reach its head, unless you waited for him to lower his head were any pikmin could reach its head. In both games, Beady Long Legs was fought in a large arena with plenty of space. He was found in the Forest Navel in Pikmin, and in places like the citadel of spiders in Pikmin 2. He also appears at the Perplexing Pool very close to the Onions after day 30. In pikmin 1 he stepped slightly faster and had more health, and Pikmin 2 he moved slightly slower and had less health. In both games, after being beaten, Beady's body would dissolve, leaving no carcass. In Pikmin 3, I think his head should stay so the pikmin could carry it. 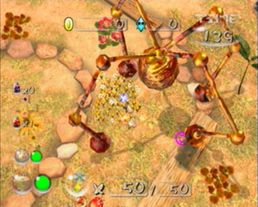 I know most people don't consider the Goolix a boss, but I do. The Goolix serves as a large amoeba that can only be penetrated with blue pikmin, along with two nuclei. One is a sapphire pearl, the other a large tan marble. Both had a different affect. The sapphire pearl was a weak point that could be swarmed for the safest strategy. The tan one, would causes the whole body to "disrupt." when this happened, any pikmin that were in contact with the membrane-like body would fly in all directions, sometimes out of bounds and out of the game. It was found at the Impact Site on even numbered days. If defeated, its body would burst in all directions leaving no body. The Goolix follows Olimar, so you are given a large battle space. In the ending enemy reel in Pikmin 1, the Goolix is seen in the Forest Navel, probably serving as a boss similar to a Smoky Progg.

The Smoky Progg is one of the most devistating bosses in all of Pikmin history. The Smoky Progg appears in the Distant Spring before day 15 in Pikmin 1. It lives in a large egg. By attacking or simply touching the egg, the Progg will emerge. 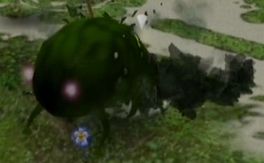 The Smoky Progg gives off deadly gases from the back from its body. If any pikmin touch this toxic, they instantly die. It only appeared in Pikmin 1, not in Pikmin 2, probably due to White Pikmin. Once killed, the Progg will drop an acorn-like item that is worth 100 pikmin!

Emperor Bulbax is the massive grub-dog in the Pikmin series. In the first game, Emperor Bulblax serves as the last boss in the game, leaving the 30th and final piece to Olimar's ship. 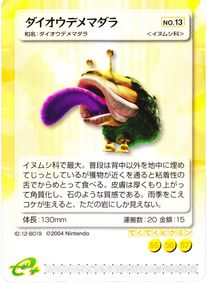 In pikmin 2, this large beast appears much more often. He appears in the Bulblax Kingdom, the Hole of Heroes, and the Emperor's Realm in Pikmin 2's challenge mode. In Pikmin 1, Emperor Bulbax's rear is shown in the ground at The Final Trial in story mode. In Pikmin 2, the grub-dog will show his two eyes above the surface, serving as a camoflauge probably. He is normally fought in large arena, considering that he has a wide arsenal of attacks.

Empress Bulbax is the second largest boss in Pikmin 2, and can smash all of your pikmin with ease. She is normally encountered in a large stage, with one small room on one side and normally another on the other. In the 2nd and 3rd battles (Frontier Cavern and Emperor's Realm), she would cause boulders to drop from the ceiling whenever she smashed into a wall. She also gave birth to the ravenous bulborb larva. You can only petrifiy her if you use an ultra-bitter spray on the mid-segment of her body.