The Smoky Progg (ドドロ?) is a hidden, optional boss found only in the first Pikmin game, and is considered one of the toughest. The only way to encounter it is to visit The Distant Spring on or before day 15. It resides in the large watery area located to the south of the landing site, in the center of a small group of islands. The Progg is in an egg and if it is approached, it will break out within four to eight seconds. When the egg breaks open, the Progg will go directly to the landing site, ignoring Captain Olimar and possibly walking through the Pikmin squad if not careful. Swarming the unopened egg with a large number of Pikmin can easily defeat the Progg, but does not produce any reward.

The beast itself is a dark green and black creature with glowing white eyes with a pinkish ring around them. It is roughly the size of a Spotty Bulborb, and it constantly emits a cloud of gas behind it that is harmful to both the Pikmin and Olimar. It is also able to uproot Pikmin sprouts. The Smoky Progg will make its way towards the landing site upon emerging, so it is necessary to kill it to avoid interference with the day's plans. It has a very high defense, so it takes a while to kill. When killed, however, it drops a golden pearl which, if carried to an Onion, will produce 100 Pikmin seeds.

The relationship between the Smoky Progg and Mamuta, of being radically different between larval and adult stages, could be derived from that of the paradox frog (Pseudis paradoxa) and its young; paradox frog tadpoles are about four times larger than their adult selves.

As soon as the egg is approached by leaders or Pikmin, the Smoky Progg will emerge out of it after some seconds. Its first goal is to go to the landing site, ignoring any prey. Once it is there, it will perform a gesture that uproots any Pikmin sprouts, even if there are none. After this, it will begin chasing after Olimar and the Pikmin. By merely moving towards them, it can kill them or damage Olimar simply by having the gas cloud touch its target. Once defeated, it explodes and leaves behind a pearl. 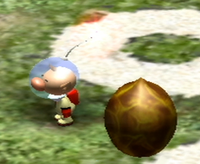 The pearl-like object it leaves behind after its death.

The Smoky Progg is unique in that it will not simply leave a corpse of itself (or even a pellet), but instead a golden orb similar to the pearls dropped by the Pearly Clamclamps. When brought to an Onion, it will create 100 Pikmin seeds, which is the highest amount of seeds for any object that can be brought.

The Progg inside its egg.

There are many different ways to defeat the Smoky Progg; each has different pros and cons. Captain Olimar cannot defeat this enemy using punches.

Swarming is utterly useless and will only result in all the Pikmin dying. Throwing Pikmin at its head is the only way to go. It's preferred to use Red Pikmin, as they're the strongest, and to use the swarm trick to allow faster throws.

One method is to get a lot of Pikmin, wait until it uses its uprooting ability and becomes still, then throw Pikmin onto its face as fast as possible. Precise aiming is required so that the Pikmin do not hit an Onion or its cloud of gas. If done correctly, the Smoky Progg will be constantly shaking off Pikmin and will not be able to move, until it dies. If there are only a few Pikmin available, throw them and whistle them back just as the Progg is shaking them off. Care should be taken when whistling, so that they do not go through the gas cloud.

It should also be noted that the Progg regenerates its health gradually, regardless of whether it is chasing Olimar/Pikmin, or merely idling at the landing site.

It is possible to take advantage of the fact that the Progg can get stuck behind an Onion's leg in battling it. After it completes its uprooting move, it can get stuck in this way from a few seconds up to several minutes. Pikmin can be tossed on its head without the enemy even being able to shake them off, and with luck, it can be killed before it frees itself from the glitch.

There is another exploit that can be used to your advantage. If the bridge that leads to the Massage Machine has not been built yet, lead the Progg behind the unbuilt bridge and then run away. The Progg will be stuck by the bridge, and will endlessly turn around in circles. You can then bring 100 Blue Pikmin out and attack the Smoky Progg.

An alternate way to hurt it would be to use Yellow Pikmin with bomb-rocks, aiming well and not hitting the Progg on the rear with the Yellow that is thrown. Any Pikmin left walking in its trail will succumb to the poison. A focused attack is also effective: by leaving 10 or more bomb-rocks near the landing site, one can throw a bomb-carrying Yellow Pikmin near the Progg when it is passing over the bomb-rocks. The Pikmin will toss its own explosive, which should make all of the other ones explode as well. The bomb-rocks used for the attack can be held by Yellow Pikmin (which will kill the Pikmin) or not – by issuing bomb-rock carriers inside the Yellow Onion, they will leave their rocks by the base of the Onion.

In a rare case, if Olimar walks up to the egg with no Pikmin, circles the egg and tries to attack it, the egg won't take any damage, yet if he goes back to an Onion to get some Pikmin and return to the cluster of islands, the egg will be gone. The only way to reset the egg is to reset the entire day. Going to sunset and continuing to the next day will not bring the egg back.

In another rare case, there is a glitch where a Pikmin that is thrown at the egg right when it hatches will float in mid-air while doing its "hitting" sequence, damaging the Progg. After about ten seconds the Pikmin will start vibrating faster and faster and eventually fall off.

Rarely, the Smoky Progg may be near a Yellow Wollywog when the Wollywog jumps. The jump will propel the Progg in to the air where it will hover for a short time until it begins to slowly return to ground level.

The Progg is also especially likely to glitch the Pikmin counter for unknown reasons.

“This hideous beast comes from a strange, hard egg. Its mollusk-like body is wrapped in an unpleasant gas that suffocates any Pikmin that inhales it. Attacking its head is successful, but it's best to eliminate in egg form.”

“Thought to be a malformed larval Mamuta.”

“Some say that this is a larval version of mamuta that was unable to complete the transformation, but as with mamuta, the smoky progg is shrouded in mystery.”
“The defeated smoky progg pearl can produce 100 new Pikmin. The ghostly creature's egg disappears from the Distant Spring after Day 15. If you find the egg, attack it until it shakes, then quickly retreat and follow the hatched progg to your landing site. Relentlessly toss Pikmin at its head and stay out of its path.”

The Smoky Progg appears as one of the spirits in Super Smash Bros. Ultimate's Spirits mode.

As the first spirit the player encounters in Adventure Mode: World of Light, Smoky Progg appears as a puppet clone of Mario in his black alternate costume. He will occasionally turn metal, making him harder to launch. Defeating him will give the player the Smoky Progg spirit, which equips the player with an Unira at the start of the match.