Pikmin.com SpaceForce is a partially lost browser game made by Nintendo of America to promote the first Pikmin game. Not much is known about its gameplay, and while archives of the website it was on exist, it's not clear if the game itself is contained within these archives. The game was developed by the Seattle-based digital media company Martini Design, using the now-discontinued Adobe Flash (known as Macromedia Flash at the time), and was accessed from www.pikmin.com. It was released during November 2001, and taken offline a few months into 2002. 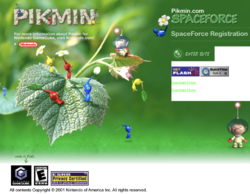 The homepage at www.pikmin.com featured some promotional art for Pikmin, and various links related to the game. These included links to a few Nintendo websites, a button to enter the main page of the game itself, and links to download the browser plugins required to play the game (Macromedia Flash Player and Apple's QuickTime).[1] 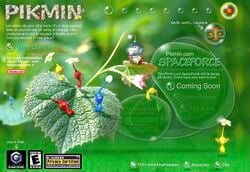 The main page featured a similar background to the homepage, with some additional game-related graphics. There was a Pikmin-style day counter and sun meter, which appear to have shown the number of days until the game released. On the right side there were a few buttons, one of which says that the game would be coming soon. It is presumed this would turn into a play button, but there is no archive showing the button looking like this. Below that were buttons to access a "Leaderboards" page and a "Tips & Info" page. To the left of that bubble was another one which has a log-in area with the title "My Team Headquarters"; it is unknown exactly what this refers to. In the bottom right corner, there were buttons to get email updates, view parental info, and read an FAQ.[2] 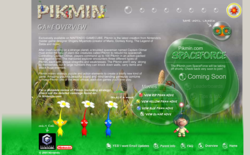 Clicking the "Game Overview" link on the main page led to a page with different background artwork, where an overview of Pikmin was written. The buttons on the right side still remained, but there were 4 additional buttons to view videos explaining Red Pikmin, Yellow Pikmin, Blue Pikmin, and Olimar. These videos cannot be found in any archive of the site.

The website featured several Flash animations. When opening the website a short animation would play, that had the camera pan onto the screen from the right, Blue Pikmin falling from the top left, landing on the GameCube logo, causing the Pikmin to bounce off and the logo to shake. A Yellow Pikmin would then slide in from the right, while the Blue Pikmin that fell began running back and forth in the background.[3]

The precise nature of the gameplay of Pikmin.com SpaceForce is unknown. However, from what remains in the archives and the few forum posts talking about it, it seems that game would have had players take the role of a Pikmin and help "a Space Explorer" escape a planet.[4] To start, players would have to create an account[5] and complete a personality test asking some questions that would determine the Pikmin type they would play as.[6] Players would group into teams, and would try to find food in the form of pellets that would increase the team's score.[7] This food was often found on other websites,[8][9][10][11][12][13] mostly ones owned by Nintendo, which featured hidden buttons that could be clicked to collect food for the game.[14] This indicates that Pikmin.com SpaceForce was part of a larger cross-promotional marketing strategy by Nintendo of America, encouraging players to explore the internet to find these pellets,[15] and encouraging people visiting those websites for other reasons to visit the Pikmin website. Each pellet collected would give between 1 and 20 points, with pellets of the same color as the player's Pikmin type giving more points. There was a leaderboard, which probably tracked the number of points obtained by each team of players.