play_4 is an unused area left in Pikmin. 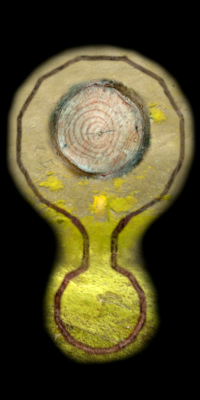 The "half-unused" texture used for the stump in play_4.

This map, in comparison to others, is very large and has very little actual textures; The area is also, for the most part, very barren and unclear if it was used for testing or if it was an early version of an area in the game. In the middle of the map, there is what appears to be a very large stump with a helicopter pad symbol on it. This could be where the S.S. Dolphin could've landed if the map were more complete, or where something else unknown was planned for later. To the northwest of the area there is an arena with two large ramps in it. The north of the area is rather intricate, and vaguely resembles the northern wing of the The Forest of Hope. There also seem to be three little caves that Olimar can enter, but they terminate almost instantly.

The texture used for the stump is half-unused; while the top section of the texture is present as the texture for the large stump, the bottom section is almost completely unused, showing a circular arena.