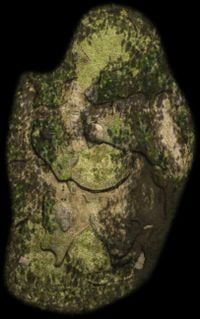 E3play_3 is an unused area in Pikmin. A near-duplicate of this area also exists, under the name play_3, that uses a different shadow projection. It is an earlier version of The Forest of Hope, devoid of water, and with some sections aligned differently. This map was seen in a 2000 E3 tech demo as the last map shown to demonstrate Pikmin. View tech demo.

It is found under /dataDir/courses/test/E3play_3.mod, and can be replaced by The Forest of Hope in the European version by using the following Action Replay code:

Note: For the sake of simplicity, it is assumed that the cardinal directions match the ones in The Forest of Hope.

In terms of geometry, this area is identical to The Forest of Hope. The differences come mainly in the fact that all bodies of water are lacking, often replaced with high walls, and that a few sections are arranged differently. The only bodies of water that have not been replaced with high walls are the ones near the cardboard box, where there is only flat ground. There is also flat ground in the easternmost area, creating a clear path between the area with the Shock Absorber from the rest. One important difference is the fact that the landing site only has one exit: the north one. There are walls enclosing the site in all other directions. The section holding the Burrowing Snagrets in The Forest Of Hope now has a large stump to the east of it. To the east of the stump is a small pathway leading downwards.

E3play_3 is the third and final area shown in the video. The Onions can be seen on the higher ground where the Burrowing Snagrets are in Pikmin. From the higher ground, Olimar is seen walking through plants to the lower ground with a small army of Pikmin, in which they wind up fighting a Spotty Bulborb and some Dwarf Bulborbs, while Shigeru Miyamoto mentions the game's textures are taken from several areas around his garden. A Yellow Wollywog and more Dwarf Red Bulborbs can be seen in the background crushing and killing Pikmin as the corpses are carried to the Onion.

E3play_3 is the first area shown in the video. Note that in the video, The Impact Site was replaced as opposed to The Forest of Hope. This results in the placement of the objects, as well as the general ambience, to match up less than it should.