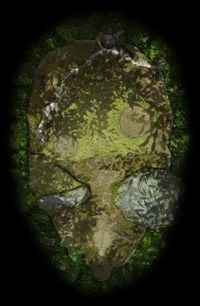 tuto2 is an unused area located in Pikmin. The "tuto" in its name indicates that it belonged to a tutorial of sorts, whereas the "teki" in the name of the "stages" that use this area indicate that they are used for enemy testing. In addition, because of the 2-player references in its configuration files, it could've been a two player arena at one point. There is also the possibility that it could have served for all three purposes. Additionally, this area appeared in multiple prerelease trailers and gameplay videos, and was clearly meant to be an main area at some point in development. Despite being extremely similar in name to tuto1, the two are radically different.

It is found under /dataDir/courses/test/tuto2.mod, and can be played on by forcing the game to load one of the "stages" that uses it.

Note: For the sake of simplicity, it is assumed that north is the direction Captain Olimar is facing at the start.

It has many unused walls and textures, for example, a stump near a destroyed wall not seen in the final game. There is a large rock immediately next to the S.S. Dolphin at the start of the map, that has textures not found in the retail game. It's by far one of the smallest maps in the game.

There are two main sections to the map. The starting area is slightly oval and small. A small passageway leads to the second, larger section. In it, there are two large cut trunks on the ground, and a stump to the north. This stump has a large root transversing most of the western section. Finally, there is a small raised ledge to the southwestern bit of this section.

Several "stages" use this area. These might have been used to test enemies, seeing as "teki" is the internal name for "enemy". The Action Replay code at the start of each of the following sections can be used to force the game to load the corresponding stage. These codes only work for the European version of the game.

teki5 and teki8 actually do not use tuto2 as a map, but are included in this article for the sake of organization.

This stage has a Swooping Snitchbug at the starting area, an Iridescent Flint Beetle after the pathway that joins the two main sections, two Burrowing Snagrets, on the circles, and a Puffy Blowhog to the northwest. The Western Snagret only comes out if the player goes to the center of the circle, whereas the eastern one actives if the player goes to any point of a considerably large rectangle around the circle.

The only enemy on this stage is a Goolix, located on the westernmost wooden circle.

This stage starts with a white bramble gate blocking the secondary area. This gate, however, can be destroyed with a single Pikmin attack. There are two Blue 1-pellets, and a Breadbug, that goes for one of the pellets shortly after the map starts. To the north, there are three fire geysers and a Mamuta.

This stage is actually The Distant Spring, but with some oddities, such as different ship parts, two Smoky Proggs, a misplaced climbing stick and a floating Golden Candypop Bud.

This stage features two Swooping Snitchbugs, the Analog Computer and the UV Lamp, guarded by a Beady Long Legs.

This stage is actually The Forest of Hope, but with different objects, notably: the only enemies are Wollywogs and Yellow Wollywogs, that are on the main area after the start, along with several male and female Sheargrubs and Shearwigs, some Wogpoles on the pond, and a Burrowing Snagret on the nearby ledge. An Extraordinary Bolt is next to where the Yellow Pikmin Onion is found, and a gate is close by.

In this video, the area has been loaded on top of The Distant Spring, which explains the music and object placement. In addition, none of the objects in the "teki" stages show up as a result.