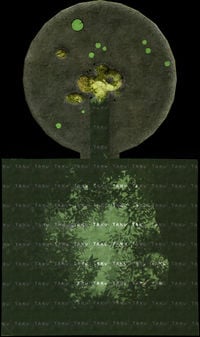 shapetst is an unused area located in the Pikmin game files. Its name most likely means that it was used for testing shapes during the game's development.

It is found under /dataDir/courses/test/shapetst.mod, and can be replaced by The Impact Site in Challenge Mode, in the European version, by using the following Action Replay code:

There are two main sections to the map: a circular pond, and a square flat area. Many textures are unused, and the map has many openings where Captain Olimar can easily fall off into an endless abyss.

The pond is textured with a regular water effect, but it acts as solid ground, not even causing splashes. In the middle of the area there are large hill-like structures that add to the evidence of the map being originally used for testing shapes. There are also many lily pads in the water, but these break the water effect beneath them.

There is a small path made of "YAKU" tiles connecting the two parts of the map, the island and the square section. The square section has many tin cans and the word "YAKU" in English tiled on the ground, and a small leafy shadow texture. There are also Ramune bottles that have no collision at all, akin to the one on The Forest Navel, and each has a different texture and reflection effect. Instead of an actual background, there is a large wall that envelopes most of the pond area, with a generic forest texture on it.

shapetst starts at about 4:43 in this video. Note that the geometry has been imposed on top of The Impact Site, which explains the music and the random object placement.