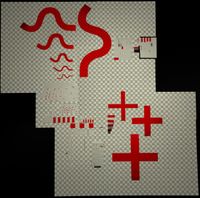 testmap is an unused area left in Pikmin. Judging from the name and features, it was most likely used for general testing purposes.

It is found under /dataDir/courses/test/testmap.mod, and can be replaced by The Impact Site in Challenge Mode, in the European version, by using the following Action Replay code:

The area consists of a very complicated design with many pathways and arches. The area's textures are mostly for testing and typically aren't very special in particular. There are many polygons with holes in them that Olimar can fall through and walk around on, most likely for testing purposes. There are also step-like platforms probably used for measuring the height of some objects in the game, and even a pathway with many deep holes that the captain and/or his Pikmin can get trapped in. There are also many bright red paths that lead above the ground and in many directions.

The map is probably the largest in size compared to even play_4. It doesn't have any boundaries either, so if Olimar were to accidentally walk off, the only solution would be to reset the game. Ordering the Pikmin to carry something will make the game freeze.

Some ship parts, miscellaneous bosses, and other objects are scattered around. One interesting thing to note is one of the objects not seen anywhere else in the game, near the starting point – its internal name is iwagen. It is similar to a vase, and it periodically shoots rocks, similar to those of the Armored Cannon Beetle, except smaller. Like the beetle's rocks, these can be destroyed with a punch.

testmap is the first map featured in this video. Note that the geometry for this level has been imposed on top of The Impact Site, so some objects and area definitions are incorrect.