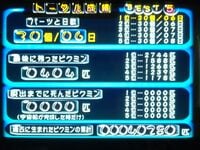 A screenshot of a completed 6 day run's end-of-game scores screen.

A 6 day run is a challenge run of Pikmin in which the player collects every part of the S.S. Dolphin in the minimum number of days possible, which is six. Few players are able to do this, as it is very difficult and requires extreme skill in managing the Pikmin. Many tricks are used in this run to help the players collect the parts faster, or in a different order. There are no limits on Pikmin deaths, though it is possible to perform this run in conjunction with a zero death run.

Different players may have slight differences in what they do throughout the run. Below is a general strategy outlining on what to do on each day.

The Forest of Hope

The first few low day runs of the game completed it in ten days.[1] No ship parts were obtained with unintended Pikmin types. Here's the general outline of such runs:

Some time after, "Sess" discovered some improvements to the route, like using bomb rocks on the Zirconium Rotor's gate, and 9 day runs became possible, removing one of the three days needed on The Distant Spring.[2]

In July of 2011, "TTR010" managed to complete the entirety of The Distant Spring in a single day.[3] This was due to a more optimized route, and the discovery of a glitch that allowed Olimar to get pushed by a Spotty Bulbear through the terrain and pop out-of-bounds, in the section of the area with the UV Lamp. With this, the player could take Olimar and some Blue Pikmin through a high ledge out of bounds that leads all the way to the Chronos Reactor, without the need to use the Golden Candypop Bud.

After The Distant Spring, the largest area, having been completed in one day, runners started considering shrinking the two other big areas into a single day. Most notoriously, "xHaii" and "Himajin". Both areas, like The Distant Spring, had a lot of tasks to complete in a single day, so routing was essential. The Forest Navel had potential, though The Forest of Hope had one critical stopping point: some ship parts require Blue Pikmin to be obtained, and Blue Pikmin cannot be unlocked until a later day.

Eventually, better routes were developed by both for the two areas, and "Himajin" managed to complete The Forest Navel in a single day in a run, becoming the first player to complete a 7 day run.

During the studies that made a 7 day run possible, The Forest of Hope had been found to be completable in one day, but it had to be done on day 3, and with many Red Pikmin. This exploited a few mechanics in order to obtain the Radiation Canopy, Geiger Counter, and Sagittarius. Runners continued investigating the area, and eventually found ways to overcome them all without needing Blue Pikmin. The strategies were optimized further and further with time.

Each area must be entered on a different day, and since there are five areas, the likely absolute minimum amount of days is 5, unless some exploit is found that can change the way day progression works. Besides that, the only thing currently stopping a 5 day run from being possible is the fact that the player needs to spend two days on The Impact Site: one for the forced tutorial on day 1 with the collection of the Main Engine, and one to collect the Positron Generator. Even if it were possible to collect the Positron Generator on day 1, doing so will end the day, which means the player will still have to return some other time to get the Main Engine.[4]