The Gluon Drive (グルーオンドライブ?, lit.: "Gluon Drive") is one of the ship parts in The Distant Spring, and it is the heaviest ship part in Pikmin. The Gluon Drive uses quark-binding metaphysical gluons and is very scientific but makes the S.S. Dolphin lift off with a roar. When collected, the Gluon Drive makes up the top part of the hull, with the large rectangular hole in the center being where the cockpit goes. 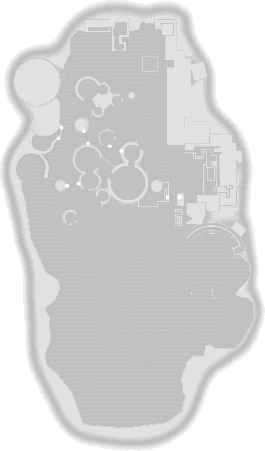 It is found near two bridges, one near the part and the other one on the opposite side. Build both and defeat the Shearwigs found near the part. The second bridge requires Blue Pikmin to be built, as you must cross water to reach it, and they can be used to defeat the Yellow Wollywog wandering there. As this is the heaviest part in the game, make sure all the Spotty Bulbears and the Puffy Blowhog have been defeated to ensure the safety of the Pikmin. It takes 50 Pikmin to lift.

It is possible to retrieve this ship part without building both bridges. You can build just the bridge on the Gluon Drive's side, let some Pikmin carry it until the end of the bridge, and whistle them back, so the part stays on the tip of the bridge. Then, have Pikmin carry one of the Shearwig corpses behind the Gluon Drive. On their way, they'll bump against it and push it into the water, where it can be retrieved like normal.[1]

Using the quark-binding metaphysical properties of gluons, this device... Well, it's...very scientific, and I don't fully understand it myself, but it was very expensive...

I have no idea how this works, but it means the Dolphin will again lift off with its characteristic roar!”