The Radiation Canopy (放射線キャノピー?, lit.: "Radiation Canopy") is a ship part in Pikmin, acting as the cockpit cover of the S.S. Dolphin. The Radiation Canopy turns the harsh radiations of space into soft infrared rays that aren't harmful to the body, making it necessary for space travel. In Pikmin 2, the Decorative Goo treasure is in the Radiation Canopy's corresponding location, and the Blue Onion replaces the Armored Cannon Beetle that guards the ship part. After being collected, it is installed on top of the cockpit, completely covering it. 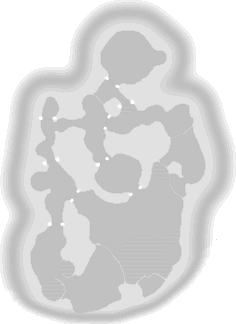 From the landing site, go through the gate that needed bomb-rocks to be destroyed. Throw at least 30 Pikmin on a ledge and then proceed through a second gate located in a small body of water, therefore requiring Blue Pikmin to destroy it. Climb to where the Pikmin are and command them to destroy another gate. Though not required, beating the Armored Cannon Beetle will produce a safe path to carry the Radiation Canopy back to the ship. The part itself is located in a small area in the top left corner of the arena.

While speed running, it is advisable to use bomb rocks to destroy the white gate. This can be done by throwing a Yellow Pikmin with a bomb rock on the ledge to the gate’s right. If done correctly, the Pikmin will walk on the top of the bridge, set down the rock, and jump into the water, after which it can be saved with the drowning reset glitch. Repeat the process, and the wall will be destroyed, without needing Blue Pikmin.

“At last! My Radiation Canopy!

This turns the harsh radiation of deep space into soft, infrared rays that are easy on the body. I'll sleep like a baby once I get this back to the ship!

I'll have to inspect it later to make sure it hasn't cracked. I'll be in for even more trouble if I have any radiation leaks.”