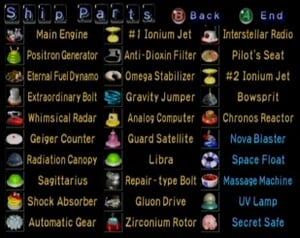 The final results menu, showing every ship part. Yellow ones are required and blue ones are optional.

Ship parts are the main collectible items in Pikmin. They are fragments of the ship used by Captain Olimar, the S.S. Dolphin. After colliding with a comet at the start of Pikmin, the S.S. Dolphin lost most of its parts, which are needed to leave the planet. Scattered around the areas in the game, they must be successfully retrieved back into the ship in order to repair it. They also appear as parts of the Hocotate ship in the Side Stories of Pikmin 3 Deluxe, and must be carried to the SPERO to be collected.

The parts are usually placed in such a manner that some form of challenge must be overcome in order to access them. Some are found on high ledges, some are behind walls, and some are inside enemies, most commonly bosses.

After a certain number of parts are recovered, the S.S. Dolphin's stability will increase, and the player will be able to access a new area. There are a total of 30 ship parts, but only 25 of them are required in order to leave the planet. Should the player collect all parts, they will be awarded with the best ending. If after 30 days, all required ship parts are collected, the normal ending will be shown. If, however, the player fails to recover all required ship parts after 30 days, they will receive the bad ending.

Every time a ship part is collected in Pikmin, gameplay stops, and a cutscene takes place showing the part being beamed into the Dolphin. 14 of the ship parts visually disappear after being collected, but 16 parts will appear on the Dolphin in a specific place upon collection, causing sparkle particles to come out. Once installed, the ship part remains visible on the Dolphin for the rest of the game.

While ship parts are not a collectible object in the story mode of any game besides Pikmin, Pikmin 3 Deluxe reintroduces some ship parts in the Side Stories mode.

In Olimar's Comeback, The President sends Olimar and Louie back to PNF-404 to repair the Hocotate ship after they had abandoned it. Collecting ship parts is slightly different in this game, however. In First Part Found and Another Part Found, the player must clear a path for the Pikmin to transport a single ship part to the SPERO before time runs out. In The Ship Restored, the player must find multiple ship parts and return them to the SPERO.

Some of the ship parts in this game mode are named, while others aren't. Although, all are near identical in appearance to the ones collected in Pikmin, despite the Hocotate ship being far different in design from the S.S. Dolphin. Those returning parts being:

Only the Main Engine and Chronos Reactor are referred to by name by Olimar in his outline and assignment reports.