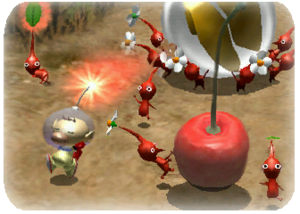 Battle Field is the first and most basic level in 2-Player Battle of Pikmin 2. It only has three types of enemies, Dwarf Red Bulborbs, Sheargrubs and the Shearwigs that hide under marbles, and all three layouts are very simple. These include three circular rooms connected by a long corridor, one large room with little alcoves that usually hold yellow marbles, and a donut-shaped cave.

Because of the simplicity of the level layouts and how easy it is to travel across and find yellow marbles, it is quite likely for a player to finish the course in about two minutes if playing for yellow marbles. Note that for the second mentioned layout, prefer the yellow marbles that are not clustered in alcoves, because it is more than likely that at least two of them have Shearwigs nesting underneath, making collecting them slower, and possibly dangerous with only a small number of Pikmin. Don't forget about the fast enemy glitch that can happen to the Shearwigs and cause Pikmin to be lost more quickly due to the Shearwigs' speedy boost.

This stage is best won by stealing marbles from the other player. Or, if you have more Pikmin than your enemy, and the layout (various models of the level picked at random whenever you select a 2-Player Battle level) is right, the narrow path will have three yellow marbles. If this is the condition, then you will want to use an ultra-spicy spray on your Pikmin, and get all three of them. Also, in the middle of the path, your can turn to see a circular area with three yellow marbles and some enemies. Kill the Dwarf Red Bulborb to the right, and get the marble it's guarding. As your Pikmin turn the corner, carrying the previously said marble, the ultra spicy spray will most likely wear off, and to make matters worse, your opponent will probably come. Whistle your Pikmin, use another ultra-spicy spray, and, before you grab the yellow marble again, use an ultra-bitter spray on the opposing Pikmin and reclaim the marble. Some items from cherries will help the strategy.