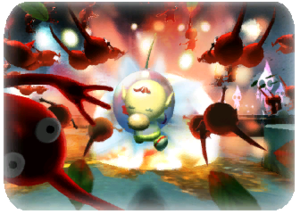 Hostile Territory is a Pikmin 2 arena for 2-Player Battle. It is arguably the hardest area, with a large number of enemies and bomb-rocks. Bomb-rocks in this area can be picked up and thrown by leaders. 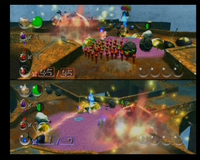 Explosions and electricity are some of the hazards.

These are the majority of the enemies which appear in this arena. Only very rarely, some boulders may fall from the sky while you are in a remote area, so be careful when you are trekking in an area filled with Anode Beetles, bomb-rocks and Watery Blowhogs. Usually, if this is to happen, it will happen next to one of the three yellow marbles, to hinder you in your path. Take caution as if your leader gets damaged by the boulders, some nearby enemies may squeeze in an attack while your character is stunned, so make sure you can make a hasty retreat.

There is a small area that is enclosed by three electrical wires near one of the players' bases. If you are lucky, this area will generate cherries every 10 seconds, giving you a seemingly unlimited supply of cherries.

Sometimes three Careening Dirigibugs may appear in the same small circular area. This is a great opportunity to stock up on yellow marbles as every Dirigibug on the field contains a yellow marble. This would be an amazing way to win, especially if they were located near your own Onion.

Be sure not to get bombarded into walls by Roulette enemies such as the Volatile Dweevil, otherwise you may get a Pikmin Extinction, and your space suit may be severely damaged. However, if you manage to escape, meaning a few Pikmin sacrifices may have to be chosen, lure it to a gang of enemies grouped together, preferably not Anode Beetles as they will not be damaged by the explosion. Try using it on Blowhogs next to each other to remove at least half or completely all their health, which means you can pass by without any worries or discomforts.

This is also the only arena where bomb-rocks appear, and you can pick them up, unlike story mode. Just walk into them for half a second to pick them up. Throw by pressing

, and put it down by pressing

. No matter which method is used, the bomb will become active, and will damage nearby leaders and kill nearby Pikmin when it explodes.

There is a rare glitch involving the Careening Dirigibugs. As soon as they notice you, they normally excrete a bomb-rock from their tiny mouths. As soon as they release it from its mouth, punch the air, and the bomb may become active, but mostly it depends on where the player is standing. Then, the Dirigibug will have an active bomb in its hands. Often times it will still throw it to the ground, but on rarer occasions the Dirigibug will keep hold of the bomb-rock, even when it explodes. This means the dirigibug will still do the carrying animation, and when it comes to the throwing animation, nothing will be dropped. This is a very weird glitch, and it can also distract players, also taking their mind off gameplay whilst the opponent is taking their marble.