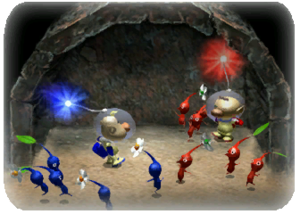 The War Path is the second 2-Player Battle map. Unlike other maps, players start with only one of each spray type on this map, instead of the usual two.

The cave's design is very basic. The rooms are simple squares connected together with metal 'pipes' or short alleys. The floor is made out of sand or partially out of metal, such as the before mentioned pipe-like corridors.

Many helpful cherries drop down from the unknown into your base if the battle takes too long. A lot of the roulette enemies such as the Withering Blowhog will keep your enemy busy, meaning you can go and hunt for yellow marbles, but only if you're willing to take a risk. Your opponent may attempt to steal your cherries whilst you're absent. Keep track of your cherries and more importantly your marble in order to keep the battle steady.

Not many enemies are seen here, making it arguably the easiest of the 2-player battle arenas.

Not a lot of the configurations have very much space between you and your opponent, making it possibly one of the smallest locations in 2-Player Battle; Dim Labyrinth probably being the largest.

Be aware of the occasional boulder that may drop from the sky in certain areas, particularly near the locations of yellow marbles.

One strategy to win is to sneak through the pipes and grab their marble while they are away. Be careful though because they cannot carry the marble back through the pipe but through the connected squares and they will be very open for attack.

This stage is good for quick battles. Try to lure your opponent away and steal their marble, or try your luck for a Pikmin Extinction with the roulette.

If you're playing on a configuration where your opponent's base is very close to your own, you can attempt to make it more enjoyable just trying to steal your opponents marble. However, it is wiser to keep track of your own marble as if you go hunting for yellow marbles, your opponent may sneak in an attack and capture your marble. Leaving a group of 25-40 Pikmin near your base may be helpful and should keep your enemies at bay. When you hear your Pikmin brawling, you know your opponent is attacking your base. Head back there and fend off the remaining enemy Pikmin.