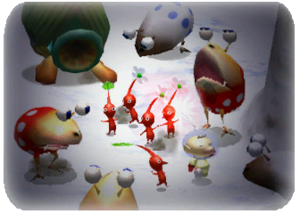 Colosseum is a 2-Player Battle stage in Pikmin 2. The stage has a snowy theme, similar to some cave sublevels in the Valley of Repose. It is home to a large number of Dwarf Red Bulborbs and Snow Bulborbs, as well as a few Armored Cannon Beetle Larvae.

The number of Armored Cannon Beetle Larvae in the area depends on which of the 3 layouts is randomly picked. Usually, the Cannon Beetles rest close by at least one of the player's Onions, and if you're low on Pikmin you may want to carry these to the Onion for a boost. You can also use the Beetles to kill the Dwarf Red Bulborbs, as a single rock can instantly defeat any one of them.

There are a lot of Dwarf Bulborbs in the arena. Some of them hold yellow marbles, but note that the number of those that do depends on the layout. Be careful though, many of them are close enough together that you will have to fight them all at the same time.

The passageways can get narrow, and Armored Cannon Beetle Larvae found in them can be very annoying to kill. This also makes it harder to avoid the Volatile Dweevil from the roulette wheel.

This stage contains many eggs, meaning more nectar for your Pikmin or sometimes, quite rarely, some ultra-spicy/bitter sprays. It is recommended to break all of the eggs to get the sprays and nectar before your opponent can.