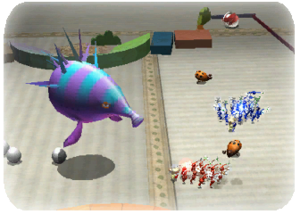 The Carpet Plain is the third 2-Player Battle map in Pikmin 2. It has the indoor style that the Glutton's Kitchen displays. The floor, as its name suggests, is covered in a fluffy gray carpet, occasionally with plates or toy blocks on it. The borders of the level are made out of baseboards, bricks, trees and bump-like "bridges" that one can walk on. All of these objects are wooden, and most of them are painted in a variety of colors.

In addition to the hazard presented by numerous enemies, boulders may fall from the ceiling in certain areas.

The Puffy Blowhogs that float around the area may annoy, but they cannot kill Pikmin directly. They yield no reward when defeated, and will sometimes hover over the plate in the middle out of range of attack, so it is best to ignore them and hope that the enemy player will waste time fighting them instead. The Blowhogs may sometimes push Pikmin where a leader's whistle cannot reach them, such that only an enemy Pikmin thrown nearby will bring them within range, especially when slowly carrying objects over the border of the area. Similarly, Puffy Blowhogs may throw Pikmin near Dwarf Red/Orange Bulborbs, putting them at risk of being eaten.