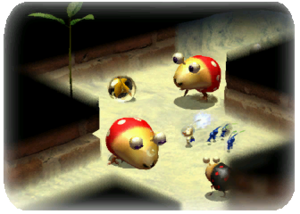 The Angle Maze is the fourth arena that players can fight on in the 2-Player Battle mode of Pikmin 2. When selected, this level shuffles between three different arenas: a maze arena which gives the stage its name, an arena with a large circular room containing a Raging Long Legs, and a square pit arena which is shaped in a downwards spiral. There are no environmental hazards in any of the three arenas. The only two types of floors in this arenas: sand and snow, have no smooth transition between them. 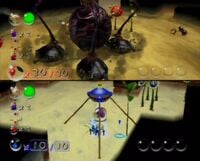 The Raging Long Legs will only appear in one arena stage in Angle Maze. This stage will consist of two bases where the Blue and Red Pikmin are held, and a few tunnels branching off of a large inner circle, where the boss is located. The Raging Long Legs, like in story mode, will fall from the ceiling and begin to stomp around. It will never leave this circular center. If the Raging Long Legs is in the arena, you should let your opponent attack or go through the area with your leader and let the giant beast crush and kill the other player's Pikmin. Another thing you can do is wake the Bulborbs and have the Raging Long Legs crush them.