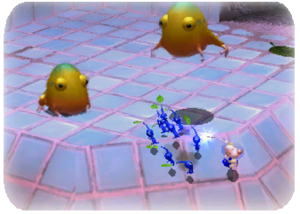 Tile Lands is a 2-Player Battle arena in Pikmin 2. As the name suggests, most of the floor is tiled. Although many sublevels that have a similar style to this arena have large pools of water in the indents, in this 2-player arena they are dry, so the blue team doesn't have an unfair advantage.

Above are the majority of the enemies which appear in this arena. Be careful not to get cornered by a Wollywog or a roulette Volatile Dweevil on the wrong edge of one of the large square shaped indents that can be found in the floor.

A wider but shorter corridor can also be found in a certain layout. This also leads directly to the opponent's Onion and contains yellow marbles. Cherries will occasionally fall from the sky here. This corridor also works well to surprise attack your opponent's Onion. Be warned, though, this is also abundant in Snow Bulborbs. The creatures can be defeated before a surprise assault, or they may optionally used for cover if an ultra-spicy spray is used on your Pikmin force prior to the raid.

Several layouts, if not all, include a small room to the side of the square shaped indent filled with Water Dumples and with a single Yellow Marble in the center. Your Pikmin squad can easily be depleted if they are not managed carefully in here. Water Dumples can be lured out of the room and possibly into the indent and defeated individually, or roulette hazards can be used to your advantage to defeat several at once.