The Bingo Battle menu is the menu in Pikmin 3 which serves as the connection between the main menu and the Bingo Battle game mode. This menu lets players pick a stage to play on and the rules for the match, and counts the number of times each player has won. 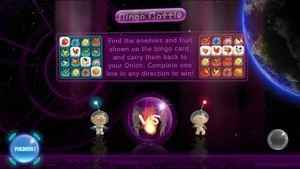 The first screen shown when the player selects Bingo Battle from the title screen is this screen, which explains the rules of the game. There is a paragraph at the top, which reads:

Find the enemies and fruit shown on the bingo card, and carry them back to your Onion. Complete one line in any direction to win!

Besides this paragraph are 2 images showing examples of completed bingo cards. Beneath it is a button labeled "VS" (short for "versus") with a fire symbol in the middle and reflections of the leaders running on either side, representing the battle between player 1 and player 2. (The leaders also have controller icons next to them if the players have selected controllers.) In the lower left is a button to return to the title screen, and in the lower right is the controller selection button. Selecting the "VS" button brings the players to the next menu screen. If the players have not selected controllers yet, this button will prompt them to do so first.

In the lower right corner of every screen in the Bingo Battle menu is a button with icons of various controllers fading in and out. In the original Pikmin 3, selecting this brings up a popup saying "P1, then P2: press

." This allows the 2 players to select which controllers they each will use. When a player presses the

button, an icon of their controller and the text "OK" will appear in a box labeled "P1" or "P2" depending on the order the players select the button in. About one second after both players have selected, there will be a sound effect and the popup will disappear. In Pikmin 3 Deluxe, a popup appears using the standard Nintendo Switch interface for selecting controllers. Note that if 2 players select a control scheme in another menu or game mode, the control scheme will carry over to Bingo Battle and does not need to be set up again. 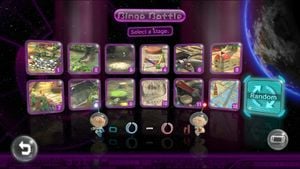 After the information screen, this screen lets the players select a map to play on. This menu is also opened at the end of every match. There are 13 squares shown in the middle of the screen, representing the 12 stages and also a random stage option. The squares are distorted slightly to make them appear as if they are in an arc formation. Below and in front of the 13 squares is the score of the 2 players, with the leaders they last were playing as on either side. A button to return to the previous menu is in the lower left corner, and the controller selection button is in the lower right corner. While this menu is viewed, the GamePad screen will show the name and map of the stage the cursor is currently over. 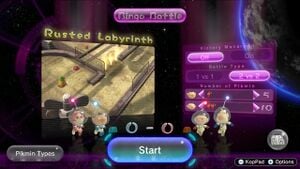 The rule selection screen for the Rusted Labyrinth.

After the stage selection screen, this screen lets the players select the rules for the match. On the left side of the screen is the stage name and a slow video montage of shots from the selected stage. (If the Random option was selected on the previous menu, the shots will be from all the stages in numerical order.) On the right side are the match options. They are:

In the center of the screen below these options is a button to start the battle. The score display from the previous menu is still present, as are the buttons in the lower corners.