The loading screen for Pikmin 3 when it boots up.

The Pikmin games display a loading screen while they are loading content to show to the player. This happens in many places, such as when the game starts up or when an area is being loaded.

In Pikmin, there is only one loading screen, which takes place before an area is entered; this is where the area is loaded. The screen is purely black apart from the name of the area in orange at the center. When the area is done loading, the screen automatically fades away, and the landing cutscene begins.

Pikmin 2 uses a very similar area loading screen to Pikmin for loading the main areas, but the name is yellow, its highlights have small glares, and a rippling effect of some text graphic occurs behind the name. When loading a cave's sublevel in story mode, the name in white will appear to fall and bounce one letter at a time into a rippling, dripping liquid over a black screen (although the effect only covers so much text; not all letters in the Subterranean Complex produce this effect). Below that is the name of the sublevel. The same screen occurs while loading a Challenge Mode level, except instead of the liquid effect there is a cloud of red and orange squares that slowly pulsate behind the text.

Before loading a 2-Player Battle stage, the game shows a different loading screen. The stage's name appears at the top, with a fire effect applied behind it. Just under it, the text "Loading..." appears aligned to the right. The second half of the screen has a large box of information. The top of the box lists the two marble-related win conditions, and under that there is a random advisory for the game mode. This screen only disappears when either player presses

, or automatically 10 seconds after the game is done loading.

Interestingly, for most cases, the rippled text that appears behind an area's name is not the name itself but something different. On the Valley of Repose, the rippled text is indeed "Valley of Repose", but on the Today's Report screen, which also has a fiery-ripple effect, the same "Valley of Repose" text is what appears behind "Today's Report". On the Awakening Wood, the text is 今日の成績? (lit.: "Today's Results"), and on the Perplexing Pool and Wistful Wild, it is "Challenge Cave", in a slightly different font from the norm.

When loading an area in Pikmin 3, a familiar black screen with the area's name in yellow appears, with a subtle reflection and rippling behind it. At the bottom, there is a randomly-picked gameplay tip, preceded by a relevant icon. This tip may get swapped out for another tip if the game takes longer to load. The same screen appears in Bingo Battle, and in Mission Mode, the screen is the same, except it also writes down the type of mission under the level's name. Besides the area loading screens, the game also shows a screen with a static image of a few Pikmin in a green environment when loading the whole game. A loading icon will also appear with a silhouetted Red Pikmin running along a loading wheel. After this screen comes the title screen. 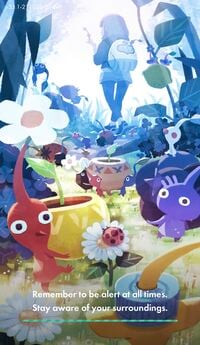 Loading screen that appears upon startup in Pikmin Bloom, in version 33.1.

When Pikmin Bloom is opened, a loading screen will appear. The background artwork has changed between versions of the app, but always contains Pikmin carrying seedlings and/or fruit. A bar across the bottom will fill up with green and dark green stripes, and will advance to the main menu when full. Above the bar there is a reminder for the player to be alert and aware of their surroundings. Update 41.0 added loading screen tips about the game that appear a few seconds after the safety reminder, changing every few seconds. Tapping the screen will also change the tip.

Tips for the 2-Player Battle mode in Pikmin 2.

While technically, it is true that there can be up to four roulette wheel spins in queue, this can lead to players believing they can only have four powers in queue, when they can actually have five (the four queued spins plus the current power on standby).

Tips in Pikmin 3's story mode. They only appear on day 3 and later, and also appear when the player suffers a Game Over.

To note is that on the game files, the "Throw Pikmin into a Candypop Bud to turn them into sprouts that are the same color as the flower!" message is declared twice, for either region.

The following tips appear on Pikmin Bloom's loading screen, as of version 57.1. The first tip always appears first; after that, tips appear in a random order.