Pikmin Park (ひろば?, lit.: "open space") is a feature in Hey! Pikmin. It is a place where gathered Pikmin can play around and be safe, but it is also the source of some Sparklium. This Sparklium, be it in the form of treasures or bundles of Sparklium Seeds, is hidden beneath clutter in the park, which can be cleaned up by the Pikmin in the park. Some of the rubble has a specific hazard, meaning only certain types of Pikmin can clear it. The more Pikmin there are cleaning something, the faster it gets done, but progress is only made when an area is completed (whether it's the first time completing the area or not), even if that progress does not result in anything yet. The Park is also where the S.S. Dolphin II crash-lands and stays, meaning it is the rendezvous point for Olimar and the ship's pod after an area is completed.

During the opening cutscene, Pikmin can be seen playing around in the Pikmin Park, next to the Onion. The S.S. Dolphin II crash-lands right next to the Onion. After Captain Olimar comes to, he and the ship's pod decide to head forward in the area to search for Sparklium. This is where he finds the Red Pikmin and the first few Sparklium Seeds. Following this, the pod takes him to the first main area, First Expedition.

After that area is completed, the ship recommends that Olimar brings the Pikmin he's found so far to a safe place. This doesn't include the Pikmin found in the Pikmin Park at the start of the game, since those got left behind when the initial exploration of the park finished. It then proceeds to beam up both Olimar and the Pikmin. After this, the Pikmin Park opens, and the Pikmin found are placed there, being the first ones to populate the park from here on out. While discussing the park, the S.S. Dolphin II points out that it found Sparklium readings within the park, but does not know where it is. The gathered Pikmin prove themselves useful here, as Olimar orders them to clean out the middle part of the park. They start plucking away at the blades of grass there. After a short conversation, the ship points out that the Pikmin found something: the Distortion Chamber. Realizing that the Pikmin won't find anything else for a while, the ship tells Olimar to order the Pikmin to continue cleaning, as the duo heads off to a new area.

When the Pikmin Park is founded, it has a lot of clutter lying around. While most of it is just piles of unwanted natural things, like lake plants or pebbles, there are also electrical wires in some places. The rewards in Pikmin Park are hidden underneath this clutter, so the Pikmin are in charge of clearing it out, piece by piece, until whatever reward is under it, if any, shows up. When a piece of clutter is cleared out, some mark will still remain on the ground indicating that there used to be something there, depending on the type of clutter, but these marks disappear after the entire section is cleared out. There is also no way of telling how close the Pikmin are to clearing out one piece of clutter – when it's cleared, the entire thing is gone (save for the aforementioned ground marks), and the Pikmin either move on to the next, or start celebrating next to the goodies they found. The following types exist:

Pikmin will only clean up grass if there is nothing else they can clean instead in that section. In addition, if the Onion and ship hangout section is empty, there is a chance that a Coppeller carrying a Sparklium Seed will appear there, as detailed here. 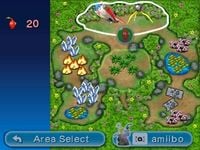 The map displaying all of Pikmin Park's sections and the unsearched obstacles in each one.

Each section has a name, shown on the top-left corner of the upper screen whenever that section is selected. Interestingly, the US version and the European version call the northernmost and the middle sections different names. The US version calls the northern part with the S.S. Dolphin II and the Onion "Central Pikmin Park", and calls the other section, directly to its south, "Pikmin Park Entrance". The European version swaps the two names around.

This section is called "Pikmin Park Entrance" in the European version of the game, as explained here.

This is the location where the S.S. Dolphin II crash-landed, and where the Onion is. When a new type of Pikmin is added to the park, it ends up here. Groups of Pikmin that manage to uncover something will also return to this section. If it does not have any Pikmin in it, there is a chance that a Coppeller carrying a yellow, red, or rainbow Sparklium Seed will show up. Ordering some Pikmin to this section will make the creature drop what it is carrying, and will award the player with it.

This section is called "Central Pikmin Park" in the European version of the game, as explained here.

When the player enters the park for the first time, this is the first section, besides the one with the Onion and ship, to be available. It only has six patches of grass. When the park is first entered, a tutorial starts, and in it, the player must order Pikmin to work on this section. Right after they begin, they discover the Distortion Chamber.

The requirements to unlock Western Pikmin Park are not known, but it may happen when the second or third patch of grass in Pikmin Park Entrance (called "Central Pikmin Park" in the European version) is cleared, or when The Shadow in the Brush is completed. When the player visits this section for the first time, the ship will point out the fireplaces, and recommend using Red Pikmin. Besides those, it has some crystals and some plain patches of grass.

This section of Pikmin Park is unlocked at the same time as Western Pikmin Park. It has a large pond, some electrical wires, a vase with some pebbles, and two patches of grass.

Pikmin Park Outskirts becomes available when all of the western section has been cleaned. It has several crystals, and three other types of rubble, but in very small quantity.

Pikmin Park Fringe is the section at the southwest. It becomes available when all of the eastern section has been cleaned up. This section has at least one piece of clutter of each type.

After First Expedition is completed (or the first area that the player brought Pikmin to the end in), the S.S. Dolphin II sends the salvaged Pikmin to the Pikmin Park, and a tutorial about the park begins. In this tutorial, the player must order the group of Red Pikmin to work on Pikmin Park Entrance ("Central Pikmin Park" in the European version). Once the player places them there, they clean up some of the grass, and before long, still inside the tutorial, they uncover the Distortion Chamber.

When the Pikmin clear up the second or third patch of grass in Pikmin Park Entrance ("Central Pikmin Park" in the European version), they uncover a stash of Sparklium Seeds, worth

After the entire park is cleaned out, caches of Sparklium Seeds will sometimes appear in a random section of the park when the player completes an area. To collect these, the player simply needs to order a Pikmin group to that section. Each of these caches adds

× 30. You may also find a Coppeller with a random sparklium Seed in the main section, as explained here.

The park is divided into sections, which become available with time. Tapping on a section on the bottom screen will show it on the top screen. Each section has its own clutter. The player does not order individual Pikmin, but orders an entire group instead, consisted of Pikmin of the same type. The player also does not directly order them to work on tasks, but instead, tells them where to go. If they enter an area with something to clean up, they will begin doing so, forming an orderly line, and, one by one, jumping into the clutter, taking part of it, and jumping back out. However, if there's nothing they can do, they just idle on that part of the park. Besides cleaning up clutter, they can also shoo away Coppellers, when they appear on the main section of the park.

Every time an area is completed, the Pikmin that made it with Olimar to the end are added to the park. The exceptions are Secret Spots, Sparklium Springs, and the first visit through the Pikmin Park, since that only counts as a tutorial. That said, to complete a Secret Spot, the player must collect a pellet, and this adds 8 Pikmin of the pellet's type to the park. Since the player can only finish normal areas with 20 Pikmin at most, that is the largest amount of Pikmin that can be brought to the Park at any one time.

The top screen is reserved entirely for showing the current section of the park live. The camera is static, and only a few dozen Pikmin are seen on-screen at once.

On the bottom screen, there is a blue band on the left that lists the number of Pikmin of each type available in the park. The bottom-left corner has a button to return to the area selection menu, and the button on the bottom-right allows the player to manage their Pikmin amiibo's level. The rest of the bottom screen shows a top-down map of the park. The player can tap the different sections here to go there. Each Pikmin type has an icon, and its location represents where that type is in the park right now. Tapping the icon and then a section will make the Pikmin go there. If the Pikmin have to head to the section that is already on-camera, the player gets to see them come up one by one to start the task or to idle, but if not, when the player chooses that section, they'll already spot the Pikmin at work or relaxing.

Each section also has icons on it that represent what types of clutter are still there, but since all icons would not fit, it only shows the most prominent ones. A section will either show the starting set of icons, or no icons at all – for instance, Eastern Pikmin Park has lake plants, electrical wires, and pebbles in pots, but only icons for lake plants and electrical wires. If Pikmin clean out all lake plants and electrical wires, but there are still pebbles left to clean, the icons on the bottom screen will still be the same ones. When everything is cleaned in the section, all icons in that section vanish. Cleaned sections will also be tinted in blue.

Pikmin in the park frolic around when they're idle, by either jumping in place, walking around, or running left and right. If they're tasked to work, they try their hardest to form an orderly line, so they can do take apart an object one by one. They sometimes trip down, which slows down the line, but this is only aesthetic.

Pikmin of all maturities appear in the park, but these are selected at random, and do not depend on the maturity the Pikmin were at when the player completed the area with them. On top of that, the maturity of a Pikmin does not have an impact on the process of cleaning up the park.