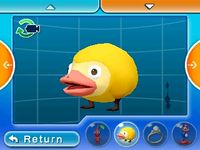 Hey! Pikmin has a log feature in which Captain Olimar writes a log about the creatures and treasures he encounters in his journey throughout the game. This feature has no name, being referred to only as "Logs" in the likes of the area selection menu, and is similar to the Piklopedia and Treasure Hoard in Pikmin 2. It also allows the player to view 3D models of each entry, but unlike Pikmin 2, the models appear in a void, and cannot be interacted with other than rotating the camera and triggering a couple of random animations by tapping on them. While viewing an entry, the top screen shows Olimar's log on the subject, while the bottom screen shows the 3D model and buttons to navigate the menu for the logs.

There are four categories in the logs menu: "Pikmin Log", "Creature Log", "Treasure Log", and "amiibo Log". Although entries are not specifically numbered, each one in a category has its own reserved spot in the list, and if the player has not yet encountered the subject, then a question mark will appear in place of its icon.

This feature becomes available after completing the tutorial level, although the creature and amiibo categories are initially locked, as explained in their own sections in this article. 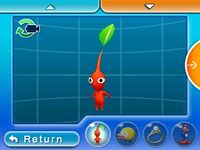 The Pikmin Log contains entry about the different Pikmin types in the game, as well as the Onion and the types of pellet that can be obtained from Secret Spots. This category is represented with the Red Pikmin's icon.

The Creature Log documents the enemies found in the journey. This category is initially unavailable, and only becomes available once the player reaches 10,000 Sparklium. The list is roughly sorted by the order in which the enemies are first introduced, and all bosses appear at the end. This category is represented with the Mockiwi's icon. The European name will be provided below the US name with an EU marker if different from the US name.

The Treasure Log contains entry about all of the non-amiibo treasures collected. A treasure is only logged after it is recovered and the player reaches the goal in the area it is in. These treasures are sorted by the order in which they appear, following this priority: Sector > Area > HUD icon, and the areas are sorted in the order: A > B > C > D > E > X. The final treasures in this category are the ones that appear on the Pikmin Park. This category is represented with the Loop of Beginnings's icon. The European name will be provided below the US name with an EU marker if different from the US name.

The amiibo Log is the same as the Treasure Log, but only contains amiibo statue treasures. Until the player obtains their first amiibo, this category is closed off, and its button shows a question mark instead. This category is represented with the Colossus in Suspenders's icon. The European name will be provided below the US name with an EU marker if different from the US name.