A spray is an item in Pikmin 2 and Pikmin 3. They can be collected and used at any time, and each has a different beneficial effect. In Pikmin 2, it is revealed that a species of plant called the Burgeoning Spiderwort produces berries that can be used to the leaders' advantage. There are two known types of spray, ultra-spicy and ultra-bitter, although only the former appears in Pikmin 3. The player can tell how many sprays they have on the HUD, and in Pikmin 3, they can also tell how close they are to concocting the next spray with berries; in Pikmin 2, the player needs to enter the pause menu for the berry count.

In Pikmin 2, there is an unlimited number of sprays the player can collect; however, if they collect more than 1,000 sprays, the thousands place won't show. In Pikmin 3, up to 99 ultra-spicy sprays can be collected.

When the player uses a spray, the current leader sprays the air in front of or behind them, and one dosage is removed from the stockpile. To use one, the player must press a certain button that maps to a certain spray. The effects are immediate, and for the case of the ultra-spicy spray, it doesn't matter whether a Pikmin actually touches the spray clouds or not, as all Pikmin in the party will get powered up.

activates the ultra-spicy spray, while

uses the ultra-bitter spray. In Pikmin 3, with the classic controls,

uses the ultra-spicy spray, and with the styuls controls, the corresponding button on the touchscreen must be tapped.

This is obtained from red berries and is to be used on Pikmin. It has the effect of temporarily enhancing their strength and speed, and make their leaves, buds, or flowers glow red. This makes Pikmin more effective at fighting, building, destroying, and carrying for the 40 seconds it lasts. In Pikmin 3, it also makes them bloom into the flower stage. When used, a comical flatulence sound is heard.

Exclusive to Pikmin 2, this spray is obtained from purple berries. It affects enemies and not Pikmin (excluding 2-Player Battle). When used, it encases any enemies in the path of the spray in stone for approximately 9 seconds; this is often enough time to kill or severely weaken the beast. If an enemy is killed while still petrified, it crumbles without leaving behind a carcass to produce more Pikmin, instead dropping nectar or sprays. When used, a comical burp sound is heard.

Both types of sprays can be made by returning ten of the respective color of Burgeoning Spiderwort berries to the Hocotate ship, the S.S. Drake, the research pod, or a SPERO, which then creates a spray dosage from them that can be used right away. The two known berry colors, purple and red, produce the two kinds of sprays. Sprays can also be found in most of the places nectar can, in the form of red or purple concentrated drop of nectars, each of which counts as one full dosage and is absorbed by a leader.

In alternate game modes, like challenges or two-player modes, the players start the level with specific number of sprays, and can obtain spray nectar inside the levels, without having to first collect ten berries from that type. In cooperative modes, both players have a shared stockpile.

To concoct a spray, ten berries must be collected. However, once at least one spray of a certain kind has been made, spray nectar of that type will begin appearing. The drops were only given a name – "spray nectar" – in Pikmin 3. These blobs immediately add one spray dose to the inventory when collected. This means that they are more valuable than berries, as one doesn't need to gather ten of them to gain a dose. Spray nectar is similar in appearance to regular nectar, but are slightly larger and either red or purple, depending on the spray.

Unlike nectar, however, Pikmin cannot collect it. Once a leader walks over it, they'll squat down and proceed to suck up the liquid. This doesn't make sense however, as the leader is seen clearly drinking it using their mouth despite the helmet blocking it, and spray nectars are implied to be inedible; this is likely done as a joke on how Pikmin drink nectars.

Due to different lighting conditions inside caves, it is possible for spray nectar to occasionally appear with odd colors, such as blue or orange.

In Pikmin 2, when a leader gets hit by an enemy, bomb-rock or something else while absorbing a concentrated dose of spray, he stops absorbing it, and it shrinks and disappears. Worst, the spray does not count as being collected, so it's very important to be careful when trying to get a spray.

Spray nectar can be found on the following places, after at least one spray of them has been made: 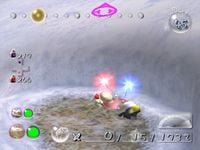 Captain Olimar and the President absorbing the same drop.