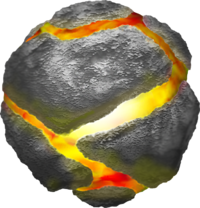 Artwork of a bomb rock, from New Play Control! Pikmin.

Bomb rocks (バクダン岩?, lit.: "Bomb rock", written as bomb-rocks before Pikmin 3) are explosive rocks in the Pikmin games. Upon being activated, a rock's fuse starts going down (represented by a colored wheel), and when it reaches zero, the bomb causes a violent explosion, capable of damaging enemies, Pikmin, leaders and some obstacles. In the first and third games, they can be carried by Pikmin, but only by Yellow Pikmin in the former. In Pikmin 2, they are much larger and serve as obstacles instead of tools, with the exception being on the 2-Player Battle stage Hostile Territory, where they can be picked up and thrown by leaders. They can also appear as items in 2-Player Battle and Bingo Battle.

Visually, they look like round rocks with cracks in them, where a yellow and red energy-based flow can be seen. Their sizes span from being a bit smaller than a Pikmin (Pikmin) to being larger than a leader (Pikmin 2); Pikmin 3's size is an in-between of the two other games' sizes. It should be noted that bomb rocks in the Wii version are bigger than the ones in the GameCube version (the latter are the size of a Pikmin). 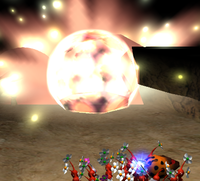 A bomb rock exploding in Pikmin 2.

Bomb rocks can be used in a number of beneficial ways.

In Pikmin and Pikmin 3, there are some reinforced walls that cannot be destroyed with Pikmin attacks like other types of gate. Instead, bomb rocks must be placed, activated, and detonated near them in order to slowly destroy them. Bomb rocks can also be used to destroy other gates, though, although some types are immune. Finally, they can be used to destroy certain other obstacles and objects:

If a bomb rock explodes near an enemy, it will damage it, depending on the creature's vulnerabilities. Some enemies can also swallow bomb rocks, to suffer even great damage once they explode inside. To swallow one, an enemy either has to be coaxed into eating a bomb rock lying on the ground, or chomp a bomb rock-carrying Pikmin, depending on the enemy. In Pikmin, the carrier Pikmin will also be eaten and killed, but in Pikmin 3, it merely gets tossed aside while the enemy swallows the isolated bomb rock instead.

The Emperor Bulblax reacts to bomb rocks in a different way, in that if they explode on its tongue or inside of it, they will stun it for some time.

In Pikmin 2, bomb rocks cannot be carried by Pikmin, but can be set off by attacking them. They can also spontaneously fall from the ceiling and instantly activate, and are also produced by Careening Dirigibugs. Volatile Dweevils carry bomb rocks on their backs, presumably for protection, even though they themselves are killed in the blast. One should never throw Purple Pikmin onto a bomb rock, as that can cause near-instant detonation, which will likely kill the Pikmin.

Bomb rocks can even be petrified to pause their timer, so one should do that if in peril, but they will not release nectar or spray like many beasts do if destroyed in that state. Petrifying an inactive bomb rock will also activate it once it breaks free. When petrified, one can be safely destroyed with five leader punches or a few Pikmin smacks. Finally, petrifying a bomb rock in the same moment it is going to blow up will make it disappear without harm.[1]

Despite being obstacles and hard to control, bomb rocks in Pikmin 2 can also be used to one's advantage, with the aforementioned uses. Fixed-location bomb rocks are less exploitable, but enemies that can generate bomb rock explosions can be abused more easily. For instance, one can have a Careening Dirigibug destroy an electrical wire without Pikmin having to be involved.

Bomb rocks can be found in several areas and function like in the main games. The timer starts ticking when a thrown bomb rock Pikmin hits the ground, and explodes after five seconds. A Pikmin holding a bomb rock can't climb up vines and will start running around in disarray if Olimar does; the bomb rock is also removed as a standby Pikmin option. However, if Olimar climbs down a vine, the Pikmin will remain on the same spot and remain an option until Olimar gets off the vine. Bomb rocks can clear harder material that Rock Pikmin can't, and are used in the fight against the Fiery Blowhog in Blazing Winds.

Artwork of a Yellow Pikmin holding a bomb rock.

The controls when dealing with bomb rock-yielding Yellow Pikmin are a bit complex, and varies slightly depending on the console.

On the GameCube version of the game, throwing a Pikmin with a bomb rock will make it stay on the spot, but primed to use the bomb. It is possible to see that the Pikmin is not idle because its stem doesn't glow and its color doesn't become paler. If an enemy is close, the Pikmin will step back and throw the bomb rock at it. In this state, when called back using the whistle, they'll drop and activate the bomb, and run towards Olimar. If, however, the player wants the Pikmin to join the party without dropping and activating the bomb, they must have Olimar touch the Pikmin directly. Dismissing will cause these Pikmin to go to their own group, but will actually become idle, as seen by their color and stem. In this state, they will also use the bomb when near an enemy, but will no long activate it when whistled.

In the New Play Control! version, switching to a different Pikmin while holding one (i.e. pressing

) will treat Yellow Pikmin as being different from bomb rock-holding Yellow Pikmin. In addition, Pikmin no longer use the bomb when called to the group, regardless of scenario.

In the 2-Player Battle stage Hostile Territory, bomb rocks can be picked up and thrown by a leader, which can be used to defeat enemies, or deal a serious blow to the opponent's Pikmin count. To perform this, one merely needs to run into a bomb rock for around one second, at which point it'll be picked up. Players can then press

to throw it (the distance is around twice as far as the reach of the GameCube game's cursor), or

Controlling the way Pikmin behave with bomb rocks is much simpler in this game compared to Pikmin – a Pikmin will always keep hold of its bomb until said Pikmin is thrown, in which case it will drop the rock exactly where it landed, and run back to the group with a cry. When dismissed, any bomb rock-wielding Pikmin will separate from the group of their type, making it easier to get only the bombers. Idle Pikmin with bomb rocks will not automatically throw their bombs at enemies, like they would in Pikmin, and they still cannot interact with other objects, not even by charging. In order to coax an enemy into eating a bomb rock, there should be a Pikmin idling with one nearby. When the enemy tries to eat that Pikmin, it will dodge at the last second and the beast will catch the explosive instead.

When a Pikmin picks up a bomb rock, it will join Olimar's squad and be treated as a separate type of Pikmin from the other types. If bomb rock Pikmin are the selected type, throwing one will make it drop the bomb where it lands, and it will then walk back to Olimar during the bomb's countdown timer. There is no other way for a bomb rock Pikmin to drop its bomb, apart from dying, which will make the bomb explode.

Note: a Volatile Dweevil can appear in any 2-player stage as a roulette item.

Icon used for the mine.

Mines are Bingo Battle exclusive explosives that attach to anything. They act similar to bomb rocks in the way that Pikmin carry them, and they can explode. This item is most commonly obtained from a roulette spin, which can be caused by retrieving a Cupid's Grenade, but can also be found on layout C of the Jigsaw Colosseum. When the "mine" roulette wheel item is used, a mine spawns near the player's group, and at that point, the player can issue a Pikmin to pick it up. The Pikmin can then be thrown at the ground, a wall, a fruit, or anything else, and where it touches, the mine will stick. From this point on, the mine will be armed, and will detonate whenever a leader draws near. If there is a mine on a fruit or any carriable object, and that object is brought to an Onion without the mine blowing up, the explosive will slide off and fall on the ground.

The mine resembles a metal barrel with a light on top. This light is green when the mine is unarmed. When it sticks onto something, the light will turn yellow, and two yellow lighthouse-like beacon lights will spin around its equator. A "boop" sound can also be heard every second or so. When it detects movement nearby, the light and beacons turn magenta, it beeps faster, and after three seconds, it explodes.

In Pikmin 3 Deluxe, there is a badge the player can gain from using a bomb rock:

In places where a bomb rock falls near Mitites, such as sublevel 6 of Bulblax Kingdom, there is a chance of it being launched back into the air if it lands on one, landing somewhere else on the level.

In Pikmin, Yellow Pikmin will sometimes fail to pick up bomb rocks, and will instead perform their "picking up" animation repeatedly. Whistling them and having them try it again is usually enough to fix the issue.

In Pikmin 2, bomb rocks cause 500 points of damage. While the values for Pikmin are not exactly known, observation indicates that the bombs are just as strong. In Pikmin 3, each enemy has data that specifies how much damage the bomb explosions cause – specifically, each enemy has data on how many bomb rock explosions are required to kill it, as well as how many bomb rock ingestions.