The hearts that display a Pikmin's friendship level.

This article is about the player's bond with a Pikmin in Pikmin Bloom. For real-life friendships in the same game, see friend.

Friendship is a game mechanic in Pikmin Bloom, where every Pikmin has its own friendship level. Friendship is shown in the form of hearts. The lowest possible friendship is 0 filled hearts, and the maximum is 4 filled golden hearts. Getting a Pikmin to maximum friendship is a way to get Decor Pikmin. 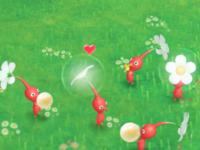 A Pikmin gaining some friendship by drinking a ball of nectar.

A Pikmin's friendship level can be increased by feeding it nectar in the garden screen, sending it on an expedition, or sending it on a mushroom challenge.

Pikmin visibly gain friendship after being fed nectar, after their expedition reward has been collected, and after the score of a mushroom challenge is displayed; this is shown by a heart briefly appearing above the Pikmin's head. If the friendship gain is enough to fill the current heart, the heart will persist for longer and expand with a special sound effect.

The most efficient way to raise a Pikmin's friendship is to feed it 5 nectar in a row (making sure the first is not white nectar if the Pikmin starts with a leaf). This is because the fifth feeding gives a major boost to friendship, enough to fill a fifth of a heart. A Pikmin will visibly hesitate before taking the nectar on the fifth feeding, which is how you can tell you're up to it. This strategy uses a lot of nectar for a large squad, so it can only be done occasionally; it is recommended to do it when nectar numbers are higher and petal numbers are lower, and to save fruit expeditions until after doing it.

When a Pikmin that didn't come from a huge seedling reaches the maximum friendship level of 4 hearts, a new expedition for a gift box will appear. The Pikmin that reached 4 hearts can be sent on this expedition, and upon getting back to the player, will turn into a Decor Pikmin.

Pikmin with a higher friendship level are stronger in mushroom challenges. The number of completed hearts a Pikmin has is used in the formula to calculate its attack power.

The following changes have been made to friendship over time: