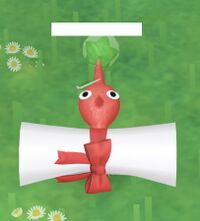 A Pikmin carrying a postcard.

Postcards (ポストカード?, lit.: "Postcard") are items in Pikmin Bloom. They can be obtained through completing expeditions and mushroom challenges. Postcards will contain the photo and name of a nearby location. Some of the Pikmin in the player's squad will be overlaid on the photo. The player can store up to 400 postcards, and once this limit is reached, the game will stop giving postcards to the player. Postcards can be viewed and discarded in the postcard menu.

Postcards can be sent to friends, and the player can select a Pikmin to carry the postcard. Once a player receives a postcard from a friend, the selected Pikmin will be holding a rolled-up envelope. Tapping on it will unveil the received postcard, along with some information about who sent it. After receiving a postcard, it can be found in the player's postcard menu with the messenger's Mii located on the bottom-right corner.

A postcard collected from an expedition.

The left two-thirds of a postcard contains a photograph of a location. This location can be a point of interest that a Big Flower or mushroom challenge is found at, or it can be any landmark in Niantic's database. A few Pikmin from the expedition or mushroom challenge will be placed on top of the image in various poses. The name of the landmark in the photograph is in the top left, and below that in smaller text is the name of the general area the landmark is in, such as the town or suburb.

The right third of a postcard is mostly empty for expedition postcards, but in mushroom challenge postcards it contains extra information. The name of the type of mushroom is shown in bold black text, then the text "Mushroom battle clear!" is shown in green italic text. Below that, a number of star icons based on the result of the challenge is shown, and below that, the exact score is written in gray.

In the top right of all postcards, there is a stamp. There are 4 stamp designs and the one on the postcard is randomly chosen. One design has a banana, one has a blueberry, one has a strawberry, and one has a pair of cherries.

The following changes have been made to postcards over time: