The squad (also group) is a term used to refer to the Pikmin that are following a leader. While Pikmin are in the squad, they can be thrown, swarmed, charged, and dismissed, among other actions.

In the main series[edit]

In the main three Pikmin games, the squad works more or less the same, bar some minor differences. Pikmin can be added to the squad via whistling, plucking, withdrawing them from the Onion, or simply from bumping into an idle Pikmin. Pikmin leave the squad when they are killed, knocked down, or otherwise unable to follow the player, among other things. In the first two games, they will get distracted by nectar weed and rubble, and will leave the squad in favor of trying to obtain some nectar from these objects. In all three games, they will stop to drink nectar.

If a Pikmin is whistled, but gets stuck on a wall or similar, they will first attempt to navigate around it, but if they fail they will stop, look around, and then become idle, leaving the squad. Leaders added to the squad will behave much the same as Pikmin do, even having similar animations. Pikmin that are too far away from the leader will also eventually leave the group after some seconds. 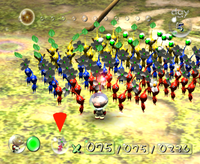 Olimar and a squad of Pikmin.

In Pikmin, the squad will follow Captain Olimar in a loose, roughly circular group. Pikmin of a lower maturity will visibly lag behind. When the player presses

, the nearest Pikmin will run to Olimar's hand, and he will pick it up. Releasing the button will throw the Pikmin. In the New Play Control! port, while Olimar is holding a Pikmin the player can press

to cycle through maturity levels while holding a Pikmin.

can be used to swarm the squad Pikmin in the direction the stick is held. In the New Play Control! port,

can be held to swarm the Pikmin to where the cursor is instead. This can be used to solve puzzles, attack creatures and set one's squad to do different tasks.

When Pikmin make contact with an object they can interact with, they will leave the squad and do that task instead. This behavior is unique to the first game.

To keep track of the squad, there are the Pikmin counter and standby Pikmin HUD indicators.

Olimar and a squad of Pikmin, in the second game

The squad in Pikmin 2 acts largely the same as it does in the first game. However, there are some improvements to the Pikmin's AI, such as them backing up and attempting to trace the leader's path if they run into a wall. They will not stop to do tasks if they run into an object in this game, except for uprooting nectar weed and hitting rubble. This game introduced the feature to the original GameCube version of being able to switch out Pikmin types and maturity with

respectively, when holding a Pikmin.

This game introduced the feature of having multiple leaders. Leaders each have separate squads, and when one leader is added to the other leader's squad, any Pikmin following them will join the squad too. If leaders are switched with

while both leaders are together, all Pikmin and the previously controlled leader will join the switched-to leader's squad.

Like in Pikmin, the player can use the Pikmin counter and standby Pikmin HUD indicators to keep track of the squad.

Once again, the squad in Pikmin 3 works mostly the same as it did in the previous games. However, swarming has been replaced with charging, which makes all Pikmin in the squad rush at a locked-on enemy, obstacle, or object. In Pikmin 3 Deluxe, charging works slightly differently. Only the selected type of Pikmin will rush forward, and the player does not need to be locked on to charge. Bomb rock carriers will not follow charge orders.

Leaders act the same as they did in Pikmin 2, however they cannot be switched to while they are part of a squad, and will stay behind when charging. In Pikmin 3 Deluxe, co-op play in Story Mode was added to the game. Leaders in this mode act, once again, largely the same as normal, except that two leaders can be controlled at once. One player can add the other to their squad using the action menu, and selecting the golden flag. This acts mostly like having a leader in the player's squad in single-player mode, however both players can whistle, throw, and charge. To leave a squad, the leader in charge can dismiss or throw the other leader out of their squad, or they will leave if knocked down, get stuck on a wall, or similar.

In Hey! Pikmin, Pikmin in the squad follow Captain Olimar in a line behind him, as the game is in 2D. They visibly overlap each other to avoid taking up too much space. When Olimar walks around, Pikmin walk towards him, but aim to stay some small distance apart from other Pikmin, so they may wait still briefly if Olimar turns around. When Olimar starts climbing a vine, the squad immediately jumps on to be in a tight group underneath Olimar, and will stay in this tight group for as long as Olimar is on a vine. When swimming in water or gliding with Winged Pikmin, Pikmin in the squad will stay behind Olimar based on the direction he is moving in.

When all Pikmin are in the squad, the Pikmin counter in the HUD will be white. When some are not in the squad, it will be grey, and when some have been separated for a while, it will flash red. When a Pikmin is thrown, it will briefly leave the squad before walking back; once it reaches the group of Pikmin or Olimar, it will be counted in the squad again. 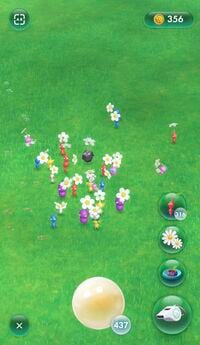 A squad of Pikmin in Pikmin Bloom.

The squad in Pikmin Adventure can be used to refer to the small Pikmin robots that follow Captain Olimar. They will always attempt to return to Olimar when thrown or knocked down, and do not drink nectar. If they are killed, a small colored circle of light will appear at Olimar's feet after a few seconds and another Pikmin will pop into existence. The number of Pikmin in Olimar's squad and their maturity will increase as Olimar levels up.