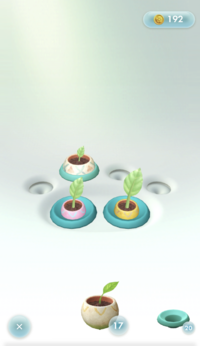 The inside of the Planter Pack with several seedlings growing.

In Pikmin Bloom, the Planter Pack is where seedlings grow into Pikmin. Certain items can be used inside of it, such as single-use slots. The Planter Pack can be accessed by clicking its button on the map screen or garden screen. The Planter Pack also appears as a physical backpack on the player's Mii, where it displays the number of steps walked that day on the back.

The Planter Pack has 6 slots in which seedlings can be placed. Two of these slots are permanent and can be used an infinite number of times, and the other 4 can only be used if the player first places a single-use slot or special slot in them.

Placing a seedling into the Planter Pack will begin the process of sprouting it with steps. After enough steps, its stem will glow, which allows it to be plucked. If multiple seedlings are fully grown, they can be plucked at the same time. After plucking them, an animation will play and the the location where the Pikmin was found will be shown. If the player plucks a huge seedling, they will see an animation of the Pikmin entering the empty planter, and coming out as a Decor Pikmin.

The single-use slot will give the player one extra slot. This slot will disappear after plucking the seedling inside it.

The special slot can be bought for 200 coins in the shop, and a pack of 5 special slots costs 600 coins.