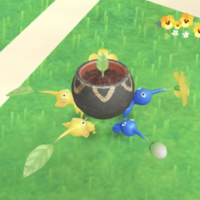 A group of Pikmin carrying a grey seedling on an expedition.

Expeditions are a feature of Pikmin Bloom, unlocked at level 6. They are the main way to collect fruits and seedlings, and by extension, nectar and Pikmin. As the player walks around and blooms Big Flowers, items will appear on the map nearby. The player can then send a group of Pikmin to walk to the item and carry it back to the player, which takes place in real time. Once the Pikmin are back, the items can be collected in the garden screen.

Selecting Pikmin for an expedition.

There is a chance for Pikmin on an expedition to return with a postcard. This postcard can be collected alongside the fruit or seedling the Pikmin was carrying, and will be shown on the screen, temporarily interrupting gameplay. The postcard will contain an image of the area the Pikmin collected the fruit or seedling from, and it will show them posing in that location.

There is no limit to the number of uncollected expeditions the player can have, but most expeditions expire after 3 days if not collected. Expeditions from blooming a Big Flower expire when the Big Flower stops blooming (usually after 23 hours, or 3 hours on community days), and gift expeditions do not expire.

The metric weight of different items also depends on the type of item, but in a different way. Seedlings have weights that vary randomly in a certain range. Red, Yellow, Blue, White, and Pink Seedlings weigh around 100 grams, while Purple, Gray, and Huge Seedlings weigh around 250 grams. The weight of fruits generally correlates to the amount of nectar that fruit will provide – for most fruits, the nectar provided is the metric weight, divided by 10, rounded down. For example, a green apple weighing 228 grams will give 22 nectar. For plums, it's the metric weight divided by 8 rounded down instead. Gifts are similar to seedlings in their variability, and weigh around 100 grams.

Pikmin on an expedition to collect a white seedling.

The length of time an expedition takes depends on the Pikmin that are sent on it. Generally, the more Pikmin are sent, the faster the expedition will be, but different Pikmin types have different attributes. Speed is only influenced by the type of Pikmin, not its maturity or friendship. Before starting the expedition, the game shows an estimate of how long it will take with the currently-selected Pikmin.

Each Pikmin type has 2 attributes that go into speed calculation: its carrying strength, and its time modifier, as listed in the table below.

The carrying speed of the group in meters per second is equal to the total strength of the group, divided by the carrying weight of the object being carried, divided by the average time modifier of all the Pikmin in the group. For example, a fruit (with a weight of 6), carried by 3 Blue Pikmin and 2 Purple Pikmin (with a total carrying strength of 13 and an average time modifier of 1.1), will be carried at 13 / 6 / 1.1 = about 1.9697 meters per second.

These speeds can be used to find the approximate time of each section of the expedition, by dividing the distance of the item (in meters) by the speed of the group. The game's time estimate is calculated by adding the times for each section and rounding it up to the next minute.

Pikmin arriving in the garden screen at the end of an expedition.

White Pikmin are a simple doubling of the speeds of Red, Yellow, and Blue Pikmin. A group of White Pikmin runs at 8m/s, and carries at a speed between 2 and 4 meters per second, depending on how many are sent.

Winged Pikmin, when they are the only type on the expedition, are the fastest type. A group of Winged Pikmin fly to the object at a blistering 20m/s, and carry it back between 5 and 10 meters per second, depending on how many are sent. When they are combined with other types though, their speed reduces to that of a Red/Yellow/Blue Pikmin. Thus, when using this type on expeditions, it's best to send only Winged Pikmin.

Purple Pikmin and Rock Pikmin greatly complicate the speed system, as their increased carrying strength also plays a role in the formula. While their running speed is slower than the other types, being 3.2m/s if they are the only types sent, their carrying speed can be considerably faster. The amount it is faster by isn't consistent, and also depends on what other Pikmin are sent. As an example, when the number of Pikmin is equal to the weight of the object and all the Pikmin are the same type, Purple Pikmin carry at 4m/s and Rock Pikmin carry at 2.4m/s.

There are 5 badges the player can gain from doing expeditions:

The following changes have been made to expeditions over time: