This article is about the rocks that fall from the sky. For other rock-like objects, see rock. 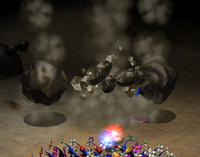 Several boulders falling at once.

Boulders are obstacles in the Pikmin games. They are large rocks that fall from the sky, often in groups, and can crush anything they land on. They can be identified by the growing shadow they cast on the floor as they fall, as well as the sliding whistle sound that accompanies their descent. These signs give players a warning that a rock is about to fall where the shadow is, giving them time to get out of the way.

In Pikmin 2, boulders appear in some caves, and also in some Challenge Mode and 2-Player Battle levels. In Pikmin 3, boulders only appear in Bingo Battle. Boulders in Bingo Battle fall faster than the ones in Pikmin 2. Rock Pikmin are immune to being crushed by boulders.

With ideal placing and timing, players can trigger a boulder drop such that it lands on top of an enemy, causing massive damage to the creature. Sometimes, if two boulders spawn close together in Pikmin 2, they can bump each other apart when they get close enough to the floor.[1]

The following can trigger a boulder to fall from the sky:

Because some of these triggers spawn boulders where the active leader is, players can anticipate a boulder downpour and quickly switch leaders to avoid having the boulders drop on leaders that have several Pikmin following them.

In Pikmin 2, it is possible to exploit a glitch in the way the game handles lying down, and using it to make the leader jump quite high. By lying down in a specific time while a boulder is dropping on the leader, the leader will be sent flying into the air.