The Pikmin series takes place over several planets. Some of these planets have gameplay take place on them, while others have important roles in the story. Space travel between planets is a major part of the story of the series.

These planets are where gameplay takes place. 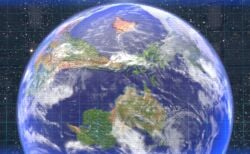 PNF-404 is the main planet of the Pikmin series. It is the setting of Pikmin, Pikmin 2, and Pikmin 3, and also appears in the Super Smash Bros. series. It is heavily implied that this planet is actually Earth in the distant future. 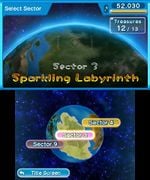 A view of part of the Hey! Pikmin planet from the sector selection menu.

Hey! Pikmin takes place on a separate planet to the main series, very similar to PNF-404, but with a different continental layout and different creatures. Its official name is unknown.

These planets are never visited in gameplay, but are mentioned in various cutscenes and dialog. 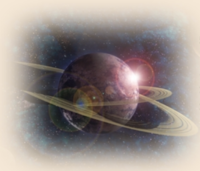 Hocotate is the home planet of Captain Olimar, Louie, and The President.

Koppai is the home planet of Alph, Brittany, and Charlie. 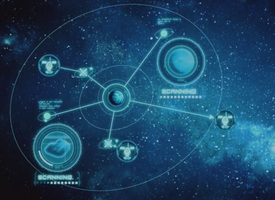 Many different planets seen in Pikmin 3's opening scene, with Koppai in the center.

There are a few planets in Pikmin 2 and Pikmin 3 that aren't mentioned and are only seen in each game's opening scene, which both show shots of space. They are purely aesthetic, and don't appear or are mentioned anywhere else in the games or series. In Pikmin 3, lots of these planets are nearly identical, but there are still distinguishable "types".

This planet is large, yellow, and has three moons. Hocotate Freight is shown to have delivered supplies to it. The moons are colored green, orange, and blue.

Most of these planets are perfectly rounded, pearly spheres, resembling the gas giants Uranus and Neptune. Others, seen in the Drake's takeoff scene seem to have a more rocky texture. None of these planets have moons.

These planets are rigid and rocky, and might as well be asteroids. This may suggest that they are quite small, as small planets in real life often develop strange shapes because of a lack of gravity.