The data file explaining the limit.

With this limit, the player cannot withdraw Pikmin from Onions such that the on-area total surpasses this limit, as the Onion menu stops them from selecting any more after that point. When an object is delivered to an Onion, Pikmin seeds come out, which count towards the on-area total. The moment the limit is reached, any new Pikmin are instead created inside the Onion.[1] This can be used to the player's advantage, given that filling out the 100-Pikmin cap and delivering the object is a faster way to obtain ready Pikmin, when compared to letting the seeds come out and plucking them. To note is that when entering a cave, all Pikmin that are in the area, but do not follow the leaders inside, are instantly sent to their Onions. Wild Pikmin that have yet to be discovered count towards the total as well. In Pikmin, the on-area counter on the HUD gently pulsates red when the limit is reached.

This limit applies to all game modes. In the case of 2-Player Battle and Bingo Battle, each player is also limited to having 50 Pikmin of their team on the area at once, and when a Pikmin dies without another Pikmin killing it, the Onion automatically ejects a new seed, if it has any. Notably, the limit does not apply on the Pikmin Short Movies, as more than one hundred Pikmin can be seen at once under Captain Olimar's control in Occupational Hazards.

In Pikmin, the on-field bubble on the HUD turns red when the Pikmin limit is reached.

The mechanic exists for a few assumed reasons:

In addition to the reasons stated above, the mechanic is also used as a minor puzzle element due to Purple Pikmin. Because they have the carrying strength and weight of 10 Pikmin, and because some treasures and obstacles require more than 100 Pikmin in strength or weight, the player is forced to use Purple Pikmin.

There are times where Pikmin have to be added to the area automatically, without the player requesting it directly, such as when discovering a new Onion in Pikmin, which causes the Onion to spit a seed. If the Pikmin limit has already been reached when this happens, the game will take some action to stop the limit from being passed.

When new types of Onion are discovered without nearby wild Pikmin, they will eject one Pikmin seed. If the Pikmin limit has already been reached, one Pikmin will be automatically and instantly returned to its respective Onion. The rules that decide what Pikmin will be chosen vary by game, and in some scenarios, special actions need to be taken because of the Pikmin's sudden disappearance.

In Pikmin, it is very easy to grow 100 Pikmin to have on the field, and then go to the Yellow Onion or the Blue Onion, but in the case of the Blue one, some scenarios are limited (like having the 100 Pikmin follow the leader) because that Onion is on a pool of water. Pikmin in this game turn invisible during cutscenes, so it's impossible to see what happens to a Pikmin that needs to be stored away.[2][3]

In Pikmin 2, it is normally impossible to have an Onion forcefully spit out a seed via cutscene while there are 100 Pikmin in the field, since the only Onion that has a discovery cutscene is the Red one, and this happens in the first day, before the player can get more than 5 Pikmin. However, by exploiting glitches, it is possible to trigger the cutscene later in the game, after 100 Pikmin have already been grown. The rules in this game are very similar to the other games. In this game, when a Pikmin is stored away, the screen goes black for a split-second, and if no Pikmin can be selected in the first place, the game crashes.[4]

In Pikmin 3, this conflict case is only possible with the Winged Onion and the Blue Onion. The Red, Rock, and Yellow Onions do not spit out seeds when discovered. Plus, in the case of the Red Onion, it cannot be unlocked with any more than the 4 starting Pikmin on the field, and the Yellow Onion can only be forcefully discovered as the first thing in the first Distant Tundra day, before the player can call or bury a large amount of Pikmin in the field. It is also likely impossible to get all the necessary Pikmin on the field to be in some special state (like buried or carrying), since the player needs at least one Pikmin (Winged Onion) or three Pikmin (Blue Onion) to start the Onion cutscene. In this game, it is possible to see the Pikmin vanish when the seed comes out.

Most of the time, the Pikmin that is sent to its Onion is the one farthest away from the newly-discovered Onion. If this Pikmin cannot be chosen, the game will skip to the second farthest one, and so on. The following table details what happens, depending on the state of the Pikmin. To note is that Pikmin type, maturity, and spicy status do not play a role in deciding the Pikmin.

For Pikmin, the rules change if there's at least one buried Pikmin; please read the next section for more information.

The Red, Yellow, and Blue Onions in Pikmin 2 and the Red, Rock, and Yellow Onions in Pikmin 3 are discovered alongside wild Pikmin, which count towards the limit. The counter on the HUD will not tally them until the Onion is deemed "discovered". While it is impossible to get close to the Pikmin limit with the Red Onion in either game or the Yellow Onion in Pikmin 3, it is possible to do so with the other Onions (although unrealistic in the case of the Rock Onion). If the player attempts to grow enough Pikmin to cross the limit, counting wild Pikmin, the cutscene that plays when the maximum amount of Pikmin are first grown will play, although the wild Pikmin will still not be counted on the HUD. In Pikmin 2, the Hocotate ship will draw attention to this.

In Pikmin, when a Pikmin extinction occurs, the Onion generates and ejects a new seed of any extinct types at the start of the following day. If there are already 100 Pikmin on the field, the seed is instead kept inside the Onion. This can only happen if the player lands on an area with 100 buried Pikmin.[7]

In Pikmin 2, it is very difficult, but not impossible, to have 100 Pikmin present on the field when the Onion needs to eject a seed because of an extinction. When one has 99 sprouts, trying to bury another Pikmin via Mamuta or Swooping Snitchbug will just knock the Pikmin back. But by sending one Pikmin to carry something that generates a good number of Pikmin to an Onion (like a Shearwig corpse), and then ordering said Pikmin to go inside the Onion or ship as soon as it's done delivering, it will manage to be inside by the time the Onion ejects the 100th sprout's seed. With this 100 sprout setup, if a Pikmin type different from these sprouts becomes extinct whilst in another area, and the player lands at the area with the 100 sprouts on the next day, the behavior will not be like in the other games. Instead, the sprout that is farthest from the extinct type's Onion will be instantly sent to its own Onion, and then the extinct type's Onion will eject a new seed freely.

In Pikmin 3, Pikmin are automatically generated during the day, immediately after the last of its type is killed. However, if there are no Pikmin of a certain type at the end of the day (say, due to sunset), and the player lands in an area with buried Pikmin of that type, no additional Pikmin will be created. If there are no Pikmin of that type buried in the area, one seed will be created, and if all the Pikmin on the field are buried, one seed will be stored automatically in the Onion.

Queen Candypop Buds receive one Pikmin of any type and spit out 9 seeds of the color it displayed at the time. Any new seeds whose creation would make the total inside the sublevel go over 100 will simply not be spat out. The flower will wilt regardless of how many Pikmin come out. If buried Pikmin exist on the surface, and 100 Pikmin are procured underground using Queen Candypop Buds, then the excess Pikmin in the leader's group will be automatically returned to the Onion when the cave is exited. The type of Pikmin returned matches the Pikmin sprouts on the surface.

When entering a sublevel with Bulbmin on it, the game attempts to spawn 10 juveniles per every adult Bulbmin. Any juvenile Bulbmin that would make the total (player's Pikmin + new Bulbmin) surpass 100 will not spawn. This means that it is possible for a sublevel to have mature Bulbmin without any young Bulbmin following behind. As such, if the player intends to obtain Bulbmin, they should enter the sublevel with less than 100 Pikmin on their party. Interestingly, the on-area counter only counts the Bulbmin when they're whistled to the group. 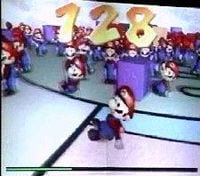 Super Mario 128 was a tech demo made for the GameCube that showed how the console could handle over a hundred independent entities. This demo is part of what inspired the creation of Pikmin, but while 128 was picked in the demo for being twice as much as 64 and a power of two, the limit in the Pikmin games was set at 100, possibly because it is a "rounder" number. Despite this, in an earlier version of Pikmin showcased at E3 2001, the counter can be seen reading 110 on-area Pikmin at multiple times.[8] It is unknown if this was the limit, if the limit was actually higher, or if a limit even existed at this point.