Pikmin Reunion (ピクミンとの再会?, lit.: "Pikmin Reunion") is the first day of Olimar's Comeback. It takes place in the Tropical Wilds, and has a unique objective: to grow 100 Pikmin.

Immediately after the events of the Story Mode, Olimar and Louie are sent back to PNF-404 by the President in order to retrieve the Hocotate ship, which was destroyed (presumably by the Quaggled Mireclops) and abandoned when the two instead hitched a ride with the Koppaites. This day shows them growing and collecting the Pikmin they will use for the remainder of this trip.

Afterwards, Olimar laments that they had landed nowhere near the Hocotate ship, which would be in the Garden of Hope.

This assignment takes place in the area immediately surrounding the landing site in the Tropical Wilds. Unique to all other assignments, the mission is to pluck 100 Pikmin sprouts to prepare for the rest of Olimar's Comeback, though the Pikmin grown on this day are not actually used on later days. Each Pikmin plucked is worth

“A real leader would maximize Pikmin gains by exploiting creature bodies and Pellet Posies. Be sure to align Pellet Posies with Pikmin colors for the highest return on investment!”

This mission is preceded by an opening cutscene:

“[Fade in to a light pink color filling the screen.]

My name is Olimar. I’m the proud captain of the S.S. Dolphin!

[The camera slowly starts zooming out to show Olimar’s face, revealing that it was initially zoomed in on Olimar’s nose. He is shown to be standing upside down. The camera continues to zoom out throughout Olimar’s voiceover, gradually revealing more of the scene.]

Or at least, I used to be. The ship I fly now got totaled on our last expedition.

[Louie can be seen floating around in the background.]

Thanks to a team of kind Koppaite scientists, we got safe passage back to Hocotate.

[It is now apparent that Olimar is standing inside some sort of spacecraft, looking out a window. The craft is upside down and rocketing downward. It begins to burn with a bright orange color.]

But we weren’t safe from our president.

(in the President’s voice, with a slight echo effect) “You imbeciles! How could you leave AN ENTIRE SPACE SHIP behind?! I don’t want to see your face around here until you bring it back!”

And that’s how Louie and I ended up back on PNF-404…again…to retrieve the Hocotate Freight ship.

[The pod is consumed in orange flames as it shoots down towards the surface of the planet.]

[Fade out. Fade in to the final scene of Pikmin 3's credits where some Pikmin sit idle on a tree stump and on the ground. Something catches their attention and they run into the tall grass towards the background. Olimar’s pod falls through the sky and crash lands some distance away with an audible boom that slightly shakes the grass.]

Hello, Pikmin! Did you miss us?

“We're here on this planet for the fourth time in order to recover my company's ship, which we had to leave behind last time. But all I really want to do is finish the job so I can return to my family. I'll need the Pikmin for that, but our crash landing startled them badly and they seem to have scattered. My first order of business will be to round a few of them up.”

“To increase your Pikmin, you'll need to carry wild creatures and pellets.”

In some situations during gameplay, Olimar or Louie will leave a comment.

“Our landing scared the poor Pikmin, but they've calmed down since. Unfortunately, we miscalculated and touched down some distance from the Onion. I'm not even sure where the ship is anymore. There are dangerous predators on all sides, but we have a job to do nonetheless.” 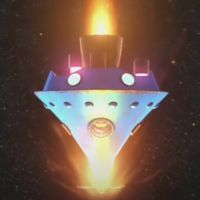 The Escape Pod, as seen in the opening cutscene.

The Escape Pod[1] is the ship Olimar and Louie use during their fourth trip on PNF-404.