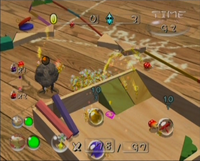 Challenge Mode is an alternative game mode in Pikmin 2. It takes place in many special caves, and the player will need to collect The Key in each sublevel in order to open the hole to the next one, or in the case of the last sublevel, the geyser that finishes the cave. It is unrelated to the first game's Challenge Mode.

All stages have a time limit (in units; each unit represents two seconds), and players must finish the current sublevel before time runs out, or they fail the challenge. Every time a new sublevel is entered, some more units of time are added to the existing amount. Although the goal is to just complete the last sublevel, players are also given a score based on how well they performed. The game keeps track of the high scores for each stage, and on top of recording the completion of a level (which marks it with a white flower), the player can also receive a pink flower ranking for that cave if they beat it without a single Pikmin death (or Pikmin sprout left behind).

There are 30 stages in all, each with a specific amount of starting Pikmin, sprays, time limits, etc. During gameplay, the player has access to only one Exploration Kit perk: the Five-man Napsack.

Co-op is a variation of Challenge Mode with two players. As with 2-Player Battle, player one controls Olimar on the top half of the screen, and player two controls Louie on the bottom half of the screen. The spray counter on the HUD shows the same value for both screens, seeing as the sprays are shared, i.e. if one player uses a spray, it'll be depleted on the counter of both players' screens. Other than this, co-op is completely identical to regular Challenge Mode.

Because the multitasking in co-op mode increases efficiency, scores between single-player mode and co-op mode are kept separately.

Challenge Mode starts with 5 levels unlocked, and for every level completed, another level is unlocked. Completing a level only requires reaching the end of the cave by collecting the keys and using the holes and geysers.

By completing all 30 levels with a pink flower (with no Pikmin losses), a secret cutscene will be unlocked, and can be viewed from the bonuses menu.

The final score the player receives depends on the amount of Pokos gathered, the amount of Pikmin that survived at the end, and the amount of time left on the timer before leaving. If the run is ended because a leader lost all his health or because the timer ran out, then the number of Pikmin and time remaining will be set to 0 when tallying up the score. The final score value is obtained by summing the three factors, but the number of Pokos and number of remaining Pikmin are multiplied by 10, as detailed in the following formula: